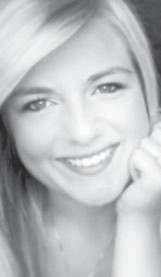 Mikayla was a senior at Fayette High School, Class of 2014, and was attending her second year at Four County Career Center in Archbold, where she was majoring in health careers.

She was an active and award-winning athlete in volleyball, basketball, and softball.

She was a member of the HOSA at Four County and attended True North Church in Wauseon.

She enjoyed bonfires and spending time with her friends, family, and cousins, who will miss her dearly.

A funeral service for Mikayla Smith will be held on Friday, Aug. 30, 2013, at 11 a.m., at the Fayette Church of the Nazarene with Pastor Rex Stump officiating. Interment will follow in Pleasant View Union Cemetery in Fayette.

The family will receive friends for a visitation on Thursday afternoon from 2-8 p.m. at the Fayette Church of the Nazarene.

Those planning an expression of sympathy may direct memorial donations in honor of Mikayla to the American Cancer Society, Team K-Bob, or the American Foundation for Suicide Prevention (AFSP).

Arrangements were entrusted to the Eagle Funeral Home- Barrett Chapel in Fayette.

Friends can share memories and condolences with Mikayla’s family online at www.eaglefuneralhomes.com.