Mignin Is Tops When It Comes To Dogs 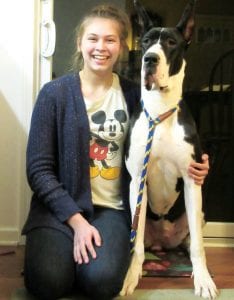 Elizabeth Mignin, an AHS sophomore, with her Great Dane, Eleanor. Mignin is the top junior showman in the nation in United Kennel Club competition. Eleanor, at 14 months of age and about 120 pounds, is ranked the fifth-best Great Dane in the UKC.– photo by David Pugh

Some members of the student body at Archbold High School think Elizabeth Mignin, a sophomore, is weird.

But that weird girl with all the dog clothes (dog Tshirts, dog-print leggings) who goes to dog shows every weekend, is in fact, the United Kennel Club number one junior dog showman.

That’s in the nation, by the way.

But she is converting them.

“I’ve actually started to take them to some shows, and they’ve sorta been kind of impressed by it,” she said.

“It’s more than that weird girl that goes to shows. There’s some skill with it; it’s not just running around the ring.”

Mignin, 15, explained junior showmanship is specifically for those 18 and under in the UKC.

To earn points for the junior showmanship title, she goes to dog shows every weekend and tries to win as many awards as possible, which count as points.

She earned enough points to be the UKC number one junior in 2017.

But, the points reset with the new year.

“Everything started fresh January 1,” she said.

“I’d like to break that, and be the number one junior this year.”

“We’ve always had dogs, as long as I’ve been born,” she said.

“I’m an only child. They were my playmates and my best friends and everything else, and I absolutely loved it.”

After her family returned to the area from a few years in Alabama, Sharon, her mom, convinced her to join 4-H.

The family had a dog, so Elizabeth used it for about a year to get started in 4- H. Then, the family went ahead and got a dog for some of the performance classes like agility and obedience

“At the Ohio State Fair two years ago, I got the versatility award. That’s five top-five placings in five different events,” she said.

Elizabeth had taken Eveie to a dog training group in Montpelier, where they encouraged her to “try out a (dog) show, just to see what I thought of one, and immediately fell in love with it,” she said.

In January 2017, again after more research, Elizabeth got a Great Dane puppy, Eleanor, or “Nora” for short­– although Elizabeth and her mother often call her Nosey.

The goal was to have two show dogs, Sharon explained.

Show dogs are not spayed or neutered. Females in heat are not allowed to participate in performance classes.

So, two dogs would allow at least one dog to be ready for show.

But Eveie developed what was believed to be a brain tumor and was euthanized around Christmas.

Elizabeth has been working with Nora, who, while still a pup, became the UKC number five Great Dane in the U.S. Just over a year old, Nora is around 120 pounds of dog, “but she has a lot of filling out to do,” Elizabeth said.

Why did she pick a Great Dane?

She has not only shown her own dogs, she has taken others into the ring, from small French Bulldogs to giant Irish Wolfhounds.

“Most people who go to a show have seven or eight dogs of the same breed,” Elizabeth said.

“They need help showing their dogs, so they’ll pull aside some junior handlers at the show like me, and have us show their dogs. It’s a wonderful experience. It’s fun!”

Elizabeth and mainly her mother travel within about a three-hour radius of Archbold to go to dog shows. It’s a nice day trip, although sometimes the day starts at 4:30 am.

“I tell people I’m the administrative assistant and pack mule. It’s amazing what you have to take to a dog show,” Sharon said.

Once a year, they go to St. Louis, Mo., to attend a UKC national event.

“I can’t think of a better thing to do with a teenage daughter. We love it,” Sharon said.

“I want to go into the medical field somewhere for college, so that’s a lot of college,” she said.

She would like to become a dog show judge, earn a little extra money, and encourage other junior showmen.

Does she want to go to college to study dog medicine, or people medicine?

“Ask her why,” Sharon said.

“I would never be able to put down a dog!” Elizabeth said.