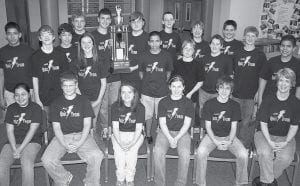 Her Gold team competed in the county middle school quiz tournament Thursday, April 3, and the match against Wauseon was a close one.

Then there were four Bible questions in a row. Lindsay said she was lucky to have put Pete Schoenhals in that match. A participant in church Bible quizzing, Schoenhals nailed all four questions.

“And we won the match by one point,” Kevin Fredrick, team member, said.

The Gold, as John Hartman, team captain said, “could have lost one, but we didn’t.”

Lindsay said out of the six years there has been competitive quizzing on the middle school level, Archbold has brought home the county trophy three times.

They pulled off back-to-back wins, taking the county title both this year and last.

Hartman said the competition in this year’s tournament wasn’t too bad, but “we did have a couple of close matches.

“We had a little trouble with Delta. They were pretty quick on the buzzer,” he said.

In quiz competition, teams of four go against each other for toss-up questions. Team members each have a button. When they think they have the answer, they push the button, which locks out everyone else.

If they answer correctly, they get a bonus question worth more points. Get it wrong, the other team gets a chance to answer.

“Sometimes, it’s like we’re competing against each other,” Emma Villanueva, a team member, said.

It’s Lindsay’s job to choose which four of the 22 team members will compete in a match.

“Sometimes, we alter what she says,” Hartman said.

“And everything else,” someone chimed in.

Hartman said he is, “pretty good” with math questions and Fredrick owns sports.

Alec Zaborniak is, “good with animals, science, and pre-history. He gets all the old stuff,” Hartman said.

“The point in check is none of us could have done it without all of the others,” Hartman said.

When asked whether other Archbold Middle School students consider quiz team mem- bers as cool or nerds, Lindsay said this year, more than ever, spectators have been coming to quiz team matches.

Jeff Litogot, team member, said a friend of his wanted to join the team after seeing what quizzing was all about.

Tinsman said the team members, “get some respect, but I think the general idea is we’re nerds.”

—— Take time to smell the roses.