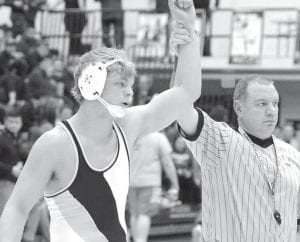 The referee raises Carson Meyer’s arm after he won an 8-1 decision over Milan Edison’s Logan Lloyd for the 170-lb. district championship.

It’s the third straight weekend Meyer claimed an individual title, starting with a Northwest Ohio Athletic League title, and then a sectional title.

The Streaks will also be represented by Brennan Short (145 lbs.), who finished third, and Andrew Francis (126 lbs.), who placed fourth.

The top four finishers in each weight class at district advance to the state meet.

Wrestlers are not seeded past the sectional tournament. Meyer was one of four sectional champions in the 16-man bracket at district.

In the first round, Meyer defeated Mohawk’s Grant Theis by a 16-1 technical fall.

In the quarterfinals, Meyer controlled Van Buren’s Cade Whitticar in a tight 3-0 decision to move into the Saturday morning semifinals, leaving him one win from a state berth. 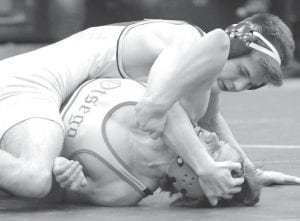 Brennan Short applies a crossface on Otsego’s Jesse Wright and scores near fall points in the match for third place. Short (53-8) faces Austin Amens of Galion Northmor, a 38-8 senior, in the first round of the state tournament.

His opponent, Tyler Ramage of Collins Western Reserve, came into the semifinals match undefeated at 32-0.

After a scoreless first period, the Blue Streak scored all the points he needed in the second with an escape, a takedown, and a penalty point for stalling for a 4-0 lead.

In the third, Meyer held Ramage down for a good portion of the period. He allowed an escape but nothing more in a 4-1 win that helped him move on to the finals, but more importantly, a spot in the state tournament.

In the final, Meyer met Logan Lloyd of Milan Edison. Meyer led 2-1 after one period.

In the second, Meyer scored an escape and another takedown for a 5-1 lead.

Lloyd chose the top position, hoping to score some near fall points, but Meyer quickly scored an escape. He added one more takedown for good measure to win 8-1. 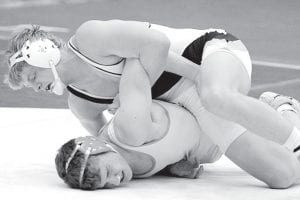 Carson Meyer attempts to wing Milan Edison’s Logan Lloyd, his finals opponent, over for near fall points. Meyer (47-3) faces Kameron Hughes of Martins Ferry, a 37-8 junior, in the first round of the state tournament.

“The expectation for Carson was to win the tournament,” said Brian Becher, AHS head coach.

“That was the whole point in dropping down to 170 lbs. We thought he could come out a champion and set himself up for a decent shot at placing (at state).

“When guys open up against him, he is tough to beat. He scores a lot of points and stays offensive; has a good demeanor and is laid back.

“I think Carson has an expectation of placing. He’s been there since he was a little kid, so I don’t think the venue is going to intimidate him.”

“Last year I was a match away from placing, and now this year I come out and win it. It just shows you how hard I worked in the offseason and during the season.

“I expect a lot of top competition, but I expect to do well.”

Archbold’s only returning state qualifier, Short had to fight through the consolation rounds to earn his return trip. 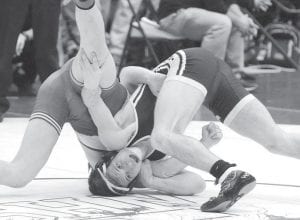 Brennan Short hits Delta’s Evan Perry with a dump to score in the District consolation quarterfinals.

Short took down Plymouth’s Noah Trimmer with a fall in 1:25 in the first round.

In the quarterfinals, Gibsonburg’s Connor Smith stopped Short with a 2-1 decision to drop the senior into the consolation bracket.

In a rematch from the sectional championship, Brennan met up with Tinora’s Aaron Short, and used a takedown in the overtime period to earn a 4-2 sudden victory win.

Short next met up with another familiar opponent, Delta’s Evan Perry, and won a 6-3 decision to move into the consolation semifinals.

Will Stieber of Norwalk St. Paul stood between Short and a return trip to state.

Short took control early and won 6-1 to advance to the match for third place.

The third-place finish assures Short a second-place opponent from another district in the first round at state.

“Brennan had a tough load,” said Becher. “He had to win three tough matches, and he beat all three kids before. 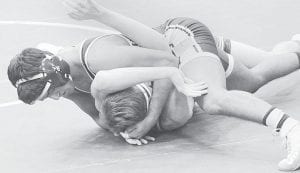 Andrew Francis has Delta’s Gabe Meyer on his back and scores a second-period fall in the District consolation semifinals to advance to the state tournament. Francis (46-12) faces Brett Szuhay of Mantua Crestwood, a 26-2 senior, in the first round of the state tournament.

“We knew he’d have to have a tough day, but hats off to him for putting together three good matches in a row to get to the finals.

“When there’s not a lot of pressure, he seems to perform very well.”

“Definitely a lot of pressure, and the fact that I lost in the quarters– that was big, because now you have to win three matches to get out, “ said Short.

“A lot of pressure, but once you get that third win then it all kinda falls off.

“The main goal was to qualify, but now you have to just try to win every single match, because this is actually the last week.”

Francis, a junior, started with an 8-5 win over Otsego’s Donovan Farley.

In the quarterfinals, Francis fell 6-3 to Milan Edison’s Hunter Vogus, dropping into the second consolation round. 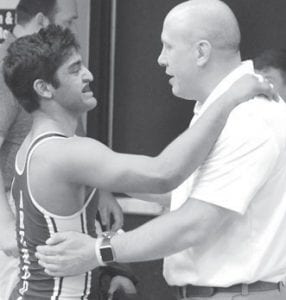 The go-to match was a rematch with Delta’s Gabe Meyer, who beat Francis in their previous two matchups.

Meyer took an early 2-0 lead, but after a hard scramble in the second period, Francis caught the Panther on his back and never let him off until the official called the pin in 2:24.

The win moved Francis to the match for third, where he dropped an 8-0 major decision in a rematch with Edison’s Vogus to finish fourth.

“We were a little worried after losing to the Edison kid and coming through the (consolations),” said Becher.

“The Mulholland kid beat him in the same round last year at the district meet, and the Meyer kid handled him the last two times they wrestled.

“But it was nice to see him get a little emotional. He was excited and proud of himself for the effort he gave. 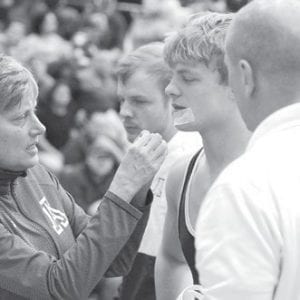 Tina Stanley, AHS head athletic trainer, tends to Carson Meyer after the junior bit through his lip in the finals.

“I’m a little worried about it being his first trip. He’s gonna be in awe a little bit, but the mats and the circle are going to be the same size, and once that whistle blows it’ll all go away.

“So you gotta just take it all in at first. Then you gotta not focus on the venue that you’re in, but in the opponent that is in front of you.

“It’s tough sometimes, coming out a four, but if you catch a kid at the right time and Andrew is aggressive, he can wrestle with almost anybody as long as he keeps his pace.”

“It’s amazing, honestly,” said Francis. “I couldn’t have made it without my coaches, my family, God; they all helped me, and I’m very blessed and very happy.”

“First is always the goal. Top five would be fantastic.

“First place might be a long shot, but what the heck.

“I think it’s a stepping stone. I’ve been down the past couple of weeks, but this has definitely been a boost.”

The three Blue Streaks will be making a trip that, for most, will be an experience like no other.

But Becher sees his kids adjusting and getting down to business.

“We will go down Thursday morning and practice in Ohio State’s wrestling room.

“I’ve got (four-time Ohio high school and NCAA champion) Logan Stieber coming to talk to the guys at the hotel.

“I just want to make it a good experience for the kids, because if you go down there and go 0-2 it’s not a lot of fun.

“It goes so much beyond the wrestling, and hopefully the kids understand that. I just want them to enjoy the whole thing.

“The wrestling and the results and stuff are nice to win, but in the hindsight of after a tournament, it really isn’t that big a deal in the grand scheme of life.”