Merillat Helps Lay Wreath At Tomb Of The Unknowns 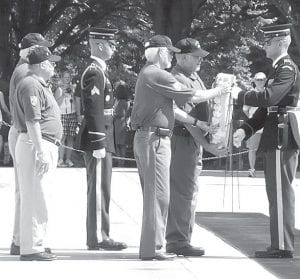 Veterans of the 630th Military Police Company during the wreath-laying ceremony at the Tomb of the Unknowns, in Arlington National Cemetery. At far left, nearest to the camera, is Roger Merillat, Archbold, who served with the 630th in Vietnam. Assisting are members of the Tomb Guards, a special Army unit that provides the ceremonial guards at the Tomb of the Unknowns. Merillat said the ceremony was an emotional experience.–courtesy photo

For Roger Merillat, Archbold, what started out as an effort to track down some army buddies led to a reunion of his unit and placing a wreath at the Tomb of the Unknowns in Arlington National Cemetery in the nation’s capital.

There lie the remains of unidentified American soldiers from World Wars I and II and Korea, representing soldiers whose remains are unidentifiable and lost to the ages.

Merillat, a Vietnam veteran, said the wreath-laying ceremony was very emotional, emotions he found it difficult to describe.

“It’s the classic lump in your throat,” he said.

Two more members of the 630th stood behind them as honor guards. Merillat was a guard.

The group was escorted down the steps of the amphitheater by the Sergeant of the Guard.

They placed the wreath, and saluted while a bugler played “Taps.”

They then dropped their salute, did an about-face, and returned up the steps.

The experience “tears your heart out,” he said.

To truly understand the journey that led Merillat to the Tomb of the unknowns, you have to start decades earlier.

After graduating from Bryan High School in June 1964, he dated Kay Munroe of Pioneer. They were engaged in November 1965; in December, he received a draft notice.

Deciding it would be better to enlist, Merillat joined the Army.

He and Kay married in March 1966, after he completed basic training.

Army testing showed he had an aptitude for clerical work, so Merillat became the company clerk of the 630th MP Company stationed at Cam Ranh Bay, north of Saigon, the capital of South Vietnam.

While he was company clerk, Merillat said if the company was short on MPs, he could find himself guarding a ship.

He also was a machine gunner, and later, a driver for an alert force, a group ready to react if an MP checkpoint was overrun.

“There was no truly safe place in Vietnam. But while I was there, Cam Ranh Bay was a very secure place,” he said.

Merillat’s year in Vietnam was before the anti-war protests gained strength.

“At the time, I thought it was the right thing to do. If your country asks you to do something, it is your duty, as a citizen, to do it, as long as it doesn’t violate the law, your personal code of conduct, or ethics,” he said.

When he returned from Vietnam, “I was never spit upon, but I can tell you even to this day, you talk about this to some people, and they will change the subject.

“That’s started to lighten up with the veterans of Iraq and Afghanistan,” he said.

But even so, Korean and Vietnam vets don’t share the same respect as other veterans.

“We’re not asking for pity or sympathy,” he said.

Today, when a Vietnam vet recognizes another by a cap or a shirt, they will greet each other with the phrase, “Welcome home.”

He began a career in banking, then spent 27 years in manufacturing. He and Kay have two children, Katrina, 41, and Keith, 37, and five grandchildren.

They moved to Archbold in 1973, the community they now call home.

For the next 40 years, Merillat said he didn’t think a lot about his service.

“My ribbons, medals, insignia, and patches were in a cigar box. I’d get them out once in a while, to make sure they weren’t corroding,” he said.

“I felt like I was tired of defending what I did. I did what I was asked to do,” he said.

After tracking down two friends from Army days on the Internet, Merillat and one of the others started looking for more members of the 630th MP company.

“Some responded, some didn’t. Some said, ‘don’t contact me.’ Others said, ‘Glad you’re doing this, but I don’t want to get involved.’

“Others said, ‘I’m not the person you’re looking for, but I’m glad you’re doing this.’ One guy sent us his pictures from World War II.”

In addition to placing a wreath at the Tomb of the Unknowns, the members of the 630th also visited The Wall– the Vietnam memorial– a black granite wall cut into the earth.

They held a brief talk, took a moment for prayer, laid a wreath, and left behind caps with the names of four members of the 630th who died in Vietnam.

Merillat said when he visited The Wall, he was so overcome, “I could have cried pretty easily, but I didn’t.”

For him, The Wall was more personal.

“Three of my classmates are on The Wall– two of whom I knew extremely well.

Merillat has prepared a book, a thick loose-leaf binder with pages of photos, maps, and his memories of his Vietnam experience. Each grandchild has a copy.

“I would encourage others to do this for their families,” he said.

A few weeks ago, Merillat said he was sitting on a bench in a Defiance store wearing a cap that identified him as a Vietnam veteran.

He was approached by a young man in his 20s who walked up to him and said, “Welcome home.”