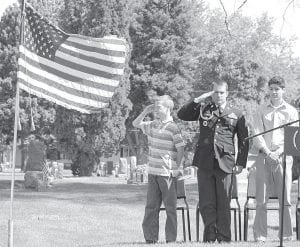 Speakers during Memorial Day ceremonies at Archbold and Pettisville talked about heroes who made the ultimate sacrifice in service to their country.

Dymarkowski joined the Ohio Army National Guard in 2007 and spent a year with a field artillery unit in Kandahar, Afghanistan.

He told the story of Roger Young, “just a little guy, five feet, two inches, with an overall sickly appearance brought on by a myriad of health problems.”

In 1940, Young joined the Ohio National Guard to earn a little extra money, and was assigned to a unit in Bowling Green, the same unit where Dymarkowski started his seven-year military career. 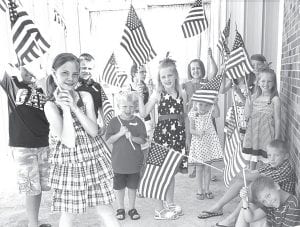 Dymarkowski said Young attacked and destroyed one of the emplacements by himself, covering the withdrawal of his unit.

Young was killed in the attack. He was awarded the Medal of Honor for his actions.

Mixing quotes from America’s Founding Fathers and the Bible, Dymarkowski said Americans have proven they would rather die fighting than submit to tyranny and oppression.

He noted in Sunday school, American boys and girls learn of the sacrifice Jesus made for mankind, giving his life.

“No one in their right mind is out seeking to be a martyr for their country, but the call to service, duty, and the preservation of liberty is so great that millions have been willing to make the ultimate sacrifice for our physical liberty, just as Christ made the sacrifice for our spiritual freedom,” he said.

“As we remember the 1.3 million-plus Americans who gave their lives so we can live in freedom,” Dymarkowski said, “let us contemplate how we may honor their memory. Parades, cookouts, speeches and ceremonies are wonderful reminders.

“But let us go beyond that. In this day and age of increasing political upheaval, we would do well to remember that our war dead did not die for the American government.

“They died for you and I, so we would have the opportunity to carry on the legacy of freedom, that we would pass it down to our children, so we would defend it at every step.”

Dymarkowski said Roger Young “did not charge those machine gun nests in order to give the NSA the ability to spy on us.

“He did not charge them so certain groups could be given preferential treatment by the IRS.

“And he most certainly did not charge them so out-ofcontrol thugs from Washington could swoop in and throw Amish men in jail for selling the wrong kind of milk.”

“My challenge to you, and of course myself,” he said, “is to honor those who have given the ultimate sacrifice by being ever vigilant, by standing in the gap to defend liberty even when it looks like you are the only one.”

He said citizens could do this by becoming an informed voter, getting involved in politics, “or maybe one day, you yourself will be called to pick up a rifle in defense of our God-given liberty.”

In addition to serving in Iraq, Poor was deployed to Africa along the Syrian border last summer, flying missions in support of U.S. and allied forces.

He said he was asked by Post 311 to speak on what Memorial Day means to him.

He said he thinks of those he knew or worked with who died, including Kevin “Sonny” Sonnenberg, who died when his jet crashed in Iraq in 2007.

“I was there that day,” Poor said.

Poor said he also thinks about those who are still in harm’s way, fighting in Afghanistan.

He said he thinks of those “who are the boots on the ground, kicking in doors, putting themselves directly in harm’s way.

“To me, those people are the ultimate warriors, and believe me when I say I take it very personally when I train to protect them from above.

“We do not wish any danger to our troops, but as a fighter wing, we yearn for the opportunity to make it rain hate on those who would threaten our brothers on the ground.

Poor said he also remembers those lost in previous wars.

“I still find it amazing how, with so little technology but so much muscle, those Americans at that time went to fight, and win, multiple wars stretched across the entire globe.”

Poor said he has been in the military 14 years, “and it still gives me goose bumps whenever I’m at a ballgame or ceremony, and hear the National Anthem in person.

“I suspect this feeling never goes away.

“I am overcome with pride and strength when I look at our flag. I have nothing but gratitude for those who defended the country I call home.”