Memorial Day ‘A Day Of Respect And Remembrance,” Says Poor 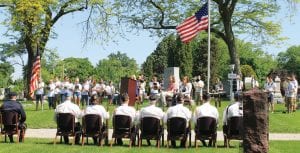 PHS Band Performs During Memorial Day Service As the honor guard of the Archbold American Legion post watches, the PHS band performs a selection of patriotic songs during the Memorial Day ceremony at Pettisville Cemetery, Monday, May 27.– photo by D. J. Neuenschwander

Speaking to the crowd gathered at the Ridgeville Corners American Legion Hall, Monday, May 27, Poor said he first thinks about four people he knew– men and women of the 180th– who died while in the service of their country.

The first is Kevin “Sonny” Sonnenberg, a lieutenant colonel who died when his jet crashed while taking off from an airbase in Iraq in 2007.

“I was there as a mechanic that day,” he said.

The second is David James Mitchell, a student pilot who died during a training flight in 2008.

Two other 180th members were killed: one while checking a flat tire, another in a domestic dispute.

“In speaking about these four heroes, I do not mean to diminish the memory or importance of the countless others who have fallen for this country,” he said.

“They are merely the first ones on my mind when I think about Memorial Day. 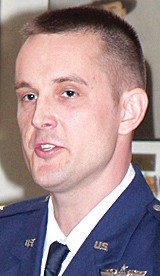 “I’m sure each and every one of you has a family member or friend that comes to mind today, and I honor them.”

His second thought, he said, is always with those currently deployed.

“Those who are still fighting today, who are still separated from their loved ones but continue to fight, especially those who are the boots on the ground, kicking in doors, putting themselves directly in harm’s way; to me, these people are the ultimate warriors, and believe me, I take it very personal when I train to protect them from above,” he said.

He does not wish for Americans to be put in danger, but as fighter pilots, “we yearn for the opportunity to make it rain hate on those who would threaten our brothers on the ground. And believe me, we’re damn good at it.”

He recognized another group “who I always consider always in harm’s way.

“That is the spouses, the mothers, the fathers, the children, the brothers, the sisters, cousins, aunts, uncles, teachers, coaches and friends of servicemen.”

Quoting Donald Trump, U.S. president, Poor said, “Our heroes have always relied on their families for strength and support.

“Serving alongside our men and women in uniform are Americans who personify the ideals of patriotism, pride, resilience, service above self, and honor.

“Danger, the hardship and uncertainty of multiple relocations, extended deployments, training, and their admirable devotion to our country and a loved one in uniform. That’s what makes America great.”

Poor also thinks of those who are missing in action or prisoners of war.

And he remembers the struggle of previous generations.

“I find it amazing how with so little, so many Americans were able to fight and win multiple planet-spanning wars,” he said.

“Those of you who were there, fighting for us in the past, in any war, you have set a very high standard for me to follow as an American soldier, and I thank you for that.”

What’s not okay, he said, “is when some Americans forget why we are barbecuing and boating on what’s meant as a day of remembrance.

“Even though some may forget, more are remembering.

“I believe this because driving around this beautiful weekend, I heard several radio stations, and singers would come on the radio and say those very same words.

“This is a day of respect and remembrance.”