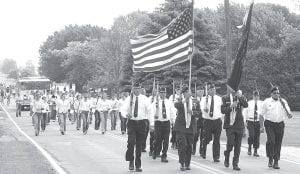 Top: Member of the Archbold Buehrer Lauber-Weckesser Post 311 of the American Legion march in the traditional Pettisville Memorial Day parade. The destination of the parade changed to the Pettisville School while the parade was underway, due to an approaching thunderstorm. Left: Michael Giese, a chaplain captain in the US Army and a member of the Ridgeville Ward L. Adams American Legion Post 454, addresses the audience during Memorial Day services. Giese said terrorists hate the United States “because they lack life, liberty, and the ability to pursue happiness.” Read the full text of Giese’s speech online at www.ArchboldBuckeye.com (free access). Right: Lenny Miller, commander of Post 311, during his address to the crowd.–photos by David Pugh and Mary Huber

Click here to read the full text of Giese’s speech 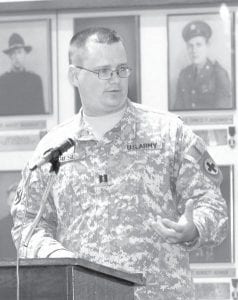