Members Of Class Of 2016 Say Archbold Schools Are Special 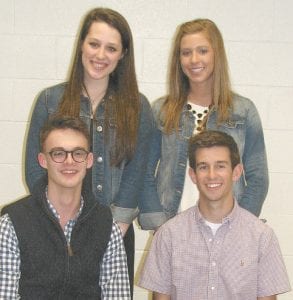 The Archbold Area School District– and Archbold High School in particular– is a special place.

That’s what members of the AHS Class of 2016 said in a recent interview.

A lot of high school student bodies divide themselves into cliques– small, exclusive groups of friends.

Not the case at Archbold.

Adam Grisier said AHS “breaks all the stereotypes of what a high school really is.

“The choir kids are in all the sports. There are football and basketball athletes in your AP chemistry classes.

“You have all these different types of people that at other schools might not be thought to be in those groups, but at Archbold, it’s all one big melting pot.

“I don’t think there are really any cliques, as you would call them at other schools.”

Ellie Rupp said, “In Archbold, you definitely have groups of friends, but it’s also really easy to have really fun relationships with people outside of the people you’ve been with for the most years.

“People have their group that they sit with at lunch, but there’s also no resentment with other people in your grade.

“It’s easy to relate to people you share common interests with.

“I mean, I know that my friends and I have a lot of similar interests, but I feel completely comfortable befriending people who have nothing to do with what I do, or aren’t involved in anything.

“There are a lot of really close friendships and people who are involved in the same things, but that’s not superficial; it’s not where you belong. There’s no stigma saying that’s where you need to be.”

Matthew Kinsman said, “Other schools say Archbold doesn’t have the cliques or the groups; it’s mostly the grade as a whole.

“You have your seniors who hang out together, and your juniors are over here.”

With about 1,300 students, Archbold is considered by many to be a “small” school in a small community of about 4,300.

Madison Kohler said she enjoys seeing the entire community, including people who don’t have students in school, turn out for sporting events such as basketball games.

“I just think that being a smaller school, that community relationship is really special, something unique about Archbold,” Kohler said.

Often, in a small school, everyone knows everyone else. For Grisier, that’s a benefit.

“If something were to go wrong, or there was a tragedy within the schools, it always seems that’s what pulls Archbold together even more.

“Even within the schools, there have been plenty of tragedies in our grade. I just feel like with the close-knit family feel of Archbold, that apart from our families at home we have a family here when we walk in the door every day.

Some would say that closeness can be a curse.

For example, if someone trips and falls flat on their face, or their boyfriend or girlfriend breaks up with them, the entire school knows about it very quickly.

Grisier disagreed, saying, “I think of it as a blessing. If you fall on your face, at least you have somebody to laugh with.

“If your girlfriend breaks up with you, because we’re so close, you’re going to have people come and comfort you.

“If a family member is sick or passes away, you’re going to have people there to be with you in your time of need.

“Some people may see a small community like this as a curse. It can also be just as much of a blessing.”

Rupp, however, started at Archbold in fifth grade, coming from a school where there were three people in her class.

“It was a struggle at first because little fifth-grade-me was super timid,” she said.

But, “I made friends like the first day. Teachers really embraced me and gave me opportunities to get involved.

“I can remember times they reached out to me in particular. I really enjoyed that, and I felt at home as soon as I came here.

“That’s another thing about being close. (When people see) bullying at other high schools, okay, that kid’s getting bullied.

“But here at Archbold we have the moral code.

“Our teachers have taught us to step in and do something about it, which is awesome.”

In fact, there have been stories of AHS seniors stepping in to stop bullying among underclassmen.

Grisier gave several reasons why he thinks the school is special.

“Archbold has a great track record of great grades and such.

“And I think it is very cool how the administration itself is very committed to trying to go into the new modern day technology, with the iPads and things like that.

“Just because how passionate the entire administration and teachers are, I think it’s a special school because it wants to do everything in its power to be able to watch its students succeed and become more prepared for the future.

Rupp pointed to the way the three schools interact.

“The elementary school, middle school, and high school (are) all working together,” she said.

“It seems like we’re involved in things that are going on in other schools, and they support us.

“I always appreciated the day that the elementary comes to watch the musical for the high school.

“I just like seeing all of us from Archbold, so it’s fun to see us all reunited, and I think that the administration does a great job of promoting that as well.”

Kinsman said, “I think that our school is special because of the students that are involved in it. Especially our senior class.”

When the seniors were asked if they had a message for the community, Grisier said, “None of us could be where we are today, prepared to be successful in our lives, without the community.

Rupp has a much shorter message.