by Pam Graber Special to the Buckeye 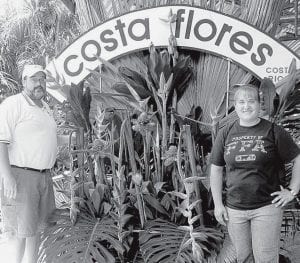 Sometimes being a good student has rewards beyond college scholarships.

Rebekah Meller’s reward was a trip to Costa Rica, June 16- 26, sponsored by FFA Global, a division of the National FFA organization.

“I won the opportunity to go on the trip by being a national finalist in the Food Science and Technology Proficiency,” Meller said.

“I had to write an essay and do an interview. The top four fi- nalists could apply for the trip, and I was in the top four.”

Meller, a 2009 Pettisville High School graduate, presented the science/FFA project she has worked on since her freshman year.

“I actually had two students qualify for the trip this year,” Poulson said.

“Laura Bruner, who graduated in 2005, qualified for the second time. Since I didn’t go with her the first time she qualified, and I also had Bekah qualify, I decided to go this time.

“Then Laura decided that instead of going on this trip, she’d rather get married and go to New Zealand.”

Meller’s trip was 100% paid for by the National FFA Foundation “except for airfare to Miami, Fla.,” Poulson said.

Poulson’s trip was 50% covered. Part of the rest came from a Pettisville School Foundation grant.

The tour group consisted of 48 students and 16 adults. Students ranged in age from 15 to 23.

Upon arriving in Costa Rica, “We went to several plantations that we could tell were set up for tourism,” Poulson said.

“Our guides made sure these plantations knew we weren’t typical tourists. They told them we had come to observe how they ‘do’ agriculture, so we saw many places and practices that weren’t on a normal tour.”

“They have a much longer crop season and use a lot of hand labor,” Poulson said.

“Their fields are smaller and their equipment is smaller. Lots of their agriculture is asexual propagation, where you cut off part of a plant and plant it. There’s not a lot of planting using seeds.”

“We did see a vegetable operation where they were growing the tiny vegetables,” Poulson said.

“Those crops were seeded, but very few of the farms we saw planted seeds.

“They use a lot of migrant labor, much like our large vegetable operations. The country seems to have a pretty good work ethic. There were a lot of 48-hour weeks.”

Meller had at least one experience that Poulson didn’t have.

“The students stayed two nights with host families,” Meller said. “This was one of my favorite parts of the trip. I enjoyed seeing real Costa Rican family life.”

“They stay up a lot later on school nights than we do here.

“Neighborhoods are more close-knit, and everyone knows everyone. Families do a lot of things together, and most of the women I saw are stay-at-home moms.

“They didn’t watch a lot of TV or, really, use a computer much. In fact, my host family had one computer, but it was broken. It just wasn’t a big deal to them like it is here.”

As far as food, “The fruit was a lot better there,” Meller said.

“We had a different kind of fruit for every breakfast, and it seemed like breakfast was mostly when fruit was served. Milk was rare and, if you got it, it was usually warm.”

Meller’s four years of high school Spanish made her the designated Spanish speaker in her group.

“It wasn’t too bad, once I got started,” she said.

Other highlights included a trip to the active Arenal volcano, whitewater rafting, and a trip through the rain forest on the Hanging Bridges of Arenal.

The only disappointment for Meller and Poulson was that they weren’t shown much in the animal sciences.

“I’ll be going to The Ohio State University in the fall, majoring in pre-vet for genetics and nutrition,” Meller said.

“I would have really liked to see more of what they’re doing in that area.”