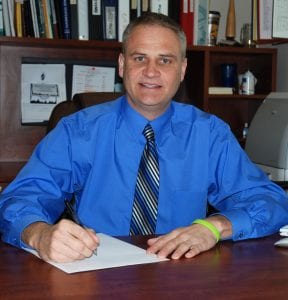 Tim Meister, Archbold High School principal since 2006, is leaving his post to become the superintendent of the Four County Career Center.
FCCC officials made the announcement Monday afternoon, April 23.
Meister will replace William Spiess, current FCCC superintendent, who has announced his retirement effective July 31. Spiess has been FCCC superintendent for four years.
David Deskins, Archbold Area School District superintendent, said the school board will hold a special meeting at 8:30 pm, Tuesday, April 24, to formally accept Meister’s resignation.
After accepting the resignation, the board will meet in executive session to discuss personnel matters. He declined to further specify the purpose of the executive session.
Meister graduated from Defiance College in 1989 with a bachelor’s degree in secondary English education and K-12 reading, with a K-12 teaching certificate.
He followed with a certificate in vocational education from Kent State in 1997, then a master’s degree in educational administration and supervision in 2004 from Bowling Green State University. He received his principal’s certification in 2005.
He began teaching secondary language arts and reading at Stryker High School in 1989. He was also the Stryker boys varsit basketball coach until 1992.
From 1992 to 1995, he was a language arts teacher and was the boys varsity assistant basketball coach for Worthington City Schools.He was also the boys freshman golf coach, and the head girls golf coach at Worthington.
In 1995, he went to work for the Bryan City School District, where he taught language arts and was the occupational work adjustment coordinator. He taught the school district’s vocational curriculum. He was also the school districts job site manager, coordinating work sites for the students in the occupational work adjustment program.
He was the head boys varsity basketball coach at Bryan, leading the Golden Bears to two Northwest Ohio Athletic League titles, three sectional titles, and Bryan’s first trip to the district finals since 1941. He held several Coach of the Year honors. He was also head boys golf coach at Bryan.
A press release from FCCC states, "Throughout his career, Mr. Meister has also been active in educational and service associations."
Meister is the current president of the Northwest Ohio District Athletic Board, is a member of the Ohio Association of Secondary School Administrators, and is also a member of Archbold Rotary.
He and his wife Karen are residents of Bryan.–Posted 4.23, 5 pm; Updated 4.24, 12:10 pm