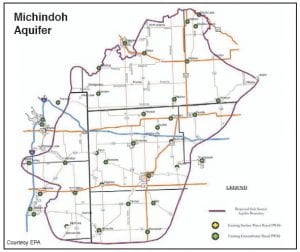 One of the first meetings on a plan to pump groundwater from the Michindoh aquifer to as far away as eastern Lucas County will be held next month.

The Ohio Environmental Protection Agency will hold an informational meeting, Tuesday, March 12, 6 pm, at the Fayette School, to discuss the site of a proposed drinking water well to be constructed by Artesian of Pioneer.

Some months ago, Ed Kidston, of Artesian of Pioneer, began discussing a proposal to pump water from the aquifer to communities outside the area.

The aquifer, as designated by the city of Bryan in 2007, covers portions of eight counties in three states.

The Michindoh aquifer includes almost all of Williams County and the northwest of Fulton County.

Archbold is not within the aquifer boundary.

Kenneth “Skip” Leupp, a German Township Trustee, said he does not believe the township is within the boundary.

In an interview late last year, Kidston said the boundary is not as defined as Bryan officials describe.

“You go 10 miles west of Archbold, it’s (underground water-bearing) sand and gravel to Chicago,” he said.

Kidston said the plan to pump drinking water to points east got its start about three to four years ago with Henry County and the communities of Liberty Center, Florida, Malinta, and the Henry County Water & Sewer District.

Archbold, Wauseon, and Napoleon all rely on surface water.

Kidston said there was water available to supply Henry County, but the problem was the cost of a 30-mile pipeline.

In order to make the ecocorner nomics work, more partners had to be found.

Next, he said, officials from the village of Whitehouse, which uses around 500,000 gallons of water a day, expressed an interest.

That, he said, improved the financial picture.

But one more partner was needed. That’s when city of Maumee representatives expressed an interest.

Once Maumee got involved, Sylvania and Perrysburg officials joined in.

He said Toledo could not compete in terms of rates, and the water would be higher in quality without the concerns of algae blooms, like the one that shut down the Toledo drinking water supply for a weekend in August 2014.

Before a public water system production well is approved, Kidston said one thing that must be proved is pumping water from the well won’t interfere with other existing wells.

To prove that, there must be a test.

In short, the test involves drilling a production well, along with smaller monitoring wells.

The production well pump is run for 72 hours.

During and after that time, experts, including hydrogeologists, watch how much water is produced; whether or not the water level in the monitoring wells drop and if so, how much; and how quickly they recover.

After the test period, Kidston said it would take a month to six weeks to analyze the results and find one of three answers– there is plenty of water available, there is water available but more tests are needed, or not enough water is available.

Years ago, the test results were estimates.

Today, the science has advanced so far that once the well capacity is proven, “you can bank on it forever and ever and ever,” he said.

Kidston said the test is a quarter-million dollar gamble, but it’s a stronger gamble than betting on red or black on a Las Vegas roulette wheel.

He is confident there is enough water– more importantly, renewable water– to supply the other communities and go forward with a project that will eventually cost hundreds of millions of dollars.

The OEPA has issued a conditional draft well site approval for a production well at 24668 Co. Rd. S.

The site is a roughly 80- acre parcel northwest of Fayette owned by Kunkle LLC, of the same address.

The property is roughly 78 acres of farm field with a home site.

There has been opposition to Kidston’s plan.

Fleming said, currently, 400,000 people in the threestate area get their drinking water from the Michindoh aquifer. It is their sole source of water.

If something were to happen to the Michindoh, it would be economically unfeasible to find other sources of water for those 400,000 people.

Fleming said many communities to the east have other sources of water readily available to them.

The permitting process for the well Kidston proposes only looks at the well itself; it does not consider the impact such a well might have on the entire aquifer.

Further, to stop such a project, the burden of proof in the courts would be on those impacted, and they would have to have sufficient resources to pursue the issue in the courts.

If Kidston’s project is successful, Fleming said it could open a Pandora’s box. Other wells could be built, drawing more water from the aquifer, causing more potential harm.

OEPA officials bill the March 12 meeting as an information session.

“The agency will respond to questions about the process.”