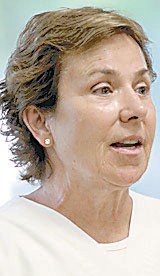 There were some against and some in favor of medical marijuana at a Tuesday, May 30 meeting on the topic at the Ruihley Park Pavilion hosted by the German Township Trustees.

But there was opposition to having a one-acre greenhouse specifically dedicated to growing marijuana in German Township.

Martha and Oscar Hackett, mother and son from eastern Ohio with roots in Archbold, attended the meeting to discuss their desire to build the greenhouse on family owned farmland on Co. Rd. 24, south of Co. Rd. G.

There were close to 80 people in the audience.

M. Hackett, a physician, gave a lengthy presentation of the various proven and potential medical benefits of some of the chemicals in the marijuana, or cannabis, plant, while Oscar discussed the business plans.

In September 2016, the state legislature approved the legalization of marijuana for medical use only.

As part of that, the plant cannot be smoked.

While the benefits and dangers of marijuana were discussed in detail, one woman in the crowd pointed out the issue has already been decided. 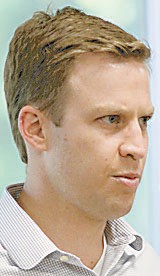 “It’s going to be in Ohio anyway. What she (another woman in the crowd) is saying is okay, but it doesn’t change the fact that we’re talking about whether we want it on this property in Fulton County,” she said.

One woman told the crowd cannabidol oil, or CBD oil, which is refined from the marijuana plant, made a marked difference in her mother’s Alzheimer’s disease.

Another man said he was from Michigan, and used medical marijuana to help with neuropathy, or nerve pain in his legs and feet.

M. Hackett mentioned several of her patients who had benefited from compounds refined from marijuana.

Objections expressed during the 90-minute meeting ranged from the chain-link fence around the facility to causing children to think that marijuana is “normal.”

The Hacketts said the industrial greenhouse building, with solid walls, will be enclosed by a chain link fence with key-card entries.

It will be a one-acre site set back on a 20-acre parcel.

“We can put bushes and beautify the site, rhododendrons, or anything you want to look at around the outside of the property. It’s not going to be something that bothers you when you see the property,” M. Hackett said.

Another concern was because the greenhouse will use well water, chemicals used in the growing process will escape, travel down the well, and contaminate the water table.

While there had been problems with chemical releases in the past, O. Hackett said, “Ohio has a very short list of approved substances that you can use to control pests and what-not.

“We are using an even smaller list than that. There’s four compounds that we would intend to use, all of which are the cannabis equivalent of organic.”

O. Hackett said, “It’s an industrial greenhouse. I don’t know if you’ve seen the greenhouses over in Delta– the NatureFresh greenhouses.”

“Call it whatever you want,” Grime said, “It’s still a marijuana-growing complex.”

“From the exterior, nobody would know the difference… You don’t see the inside of the facility, so it’s not like you look at it and think, ‘that was a marijuana facility,” O. Hackett said.

Attending the meeting was Max Nofziger, head of the Multi-Area Narcotics Task Force, commonly known as the MAN Unit.

Nofziger, who said he was “100% opposed” to the German Township greenhouse, questioned the Hacketts several times. He opposed marijuana in principal.

When asked by one man why the MAN Unit didn’t oppose medical marijuana while it was being discussed in Columbus, Nofziger said, “We weren’t asked.”

Nofziger attended the meeting with one other MAN Unit officer. Both brought up the issue of marijuana as a “gateway” to more dangerous drugs, such as heroin and cocaine.

The officer said in 2015, there was a roundup of people suspected of drug-related crimes. There were 119 arrests.

“We spoke to each and every one of them, and every single person we spoke to, with the exception of I think two of them, said the first drug they ever used was marijuana.”

“There’s nothing inherently gateway about it, any more than beer.” Trustees

Bruce Lauber, Skip Leupp, and Randy Ruffer, township trustees, were all in attendance.

When the trustees were asked questions, Lauber, the president of the group, responded.

The township trustees first voted to ban medical marijuana from the township at their May 8 meeting.

They heard a presentation from the Hacketts at their May 22 meeting, which resulted in the May 30 Community Night meeting.

Lauber said the trustees would have to hold a second vote on the marijuana ordinance in order to allow the Hackett’s proposed operation.

That vote would have to be at a public meeting.

The trustees’ decision will “depend on how the community feels,” Lauber said.

“The local community. That’s what it depends on.”

John Trudel, rural Archbold, pressed Lauber on whether or not the property would have to be rezoned to allow the greenhouse.

Lauber said that would require an opinion from Scott Haselman, county prosecuting attorney.

M. Hackett said her team is trying to do the job of producing medical marijuana products, “the best it can be done…”

One man at the meeting said, “I would encourage you to sell your property and buy an acre or two in northeast Ohio.”