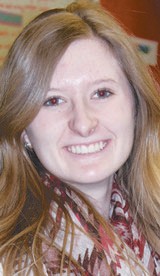 For the second year in a row, Allie McQuade, an AHS senior, sang the national anthem at the Schott.

“It went well!” McQuade said in an email to this newspaper.

“I was very at peace during the performance, and I thank God for that.”

She said she was contacted by OHSAA officials and asked to sing again in 2016.

“I feel incredibly blessed to be invited back,” she said.

Was she excited? Proud? Thrilled?

“I was all of the above! Very honored, thrilled, and blessed to have the privilege of singing our nation’s anthem at such a big event,” she said.

Her first trip to the Schottenstein Center was on March 28, 2015, to sing before the tipoff of the Division III championship game.