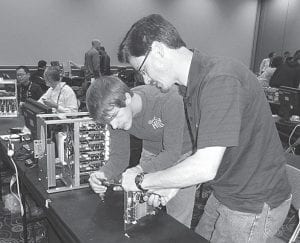 Matt McCoy is a mathematics major at Bluffton University, but he has several other academic interests, too.

In November, he had the opportunity to explore one of them on a level “most undergraduates don’t get to see,” said Stephen Harnish, a professor and chair of math at BU.

And while he attended presentations, hands-on workshops and tutorials there, he was much more than a passive observer, Harnish noted.

At the conference, McCoy helped Harnish build a computer “minicluster” that will become Bluffton’s own.

Awarded to the university through a competitive application process, it will be used this spring to augment Harnish’s ongoing molecular dynamics research at the Ohio Supercomputer Center, as a learning “playground” for math and information technology majors and to develop student projects for math courses.

Harnish also plans to demonstrate its capabilities during a spring visit to China West Normal University, with which Bluffton has started a collaborative relationship.

Slightly larger than some desktop computers, the minicluster, called LittleFe, includes six processors that work together simultaneously for “parallel processing.”

Exploring those processing capabilities before and during the conference has given McCoy a good feel for independent research in computer science.

Having taken three computer courses as a first-year student, McCoy “had the background and level of interest to explore computer science career options” at the event.

McCoy described “building a high-performance computer from the ground up” as one of his conference highlights.

Among the others was a tutorial offered by an engineering company that uses high-performance computing for such purposes as testing stresses on roads and buildings.

His other interests include engineering and physics, as well as finance.