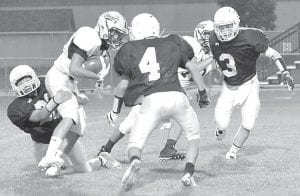 Gavin Grime (22) wraps his arms around a Blue Devil’s leg to bring him down. Toby Walker (4) and Isaac Petersen (3) are ready to help on the tackle.–photo by Mario Gomez

It’s still a young season, but a come-from-behind win over visiting Wickliffe (1-1), Friday, Sept. 4 made the home football opener for Archbold a little more enjoyable.

The Blue Devils made the more-than-three-hour journey from the east side of Cleveland, only to have the bus ride home seem even longer as Seth Mayer outran the visitors on an 85-yard kickoff return with less than a minute left to give AHS a 26-21 win and a 2-0 record.

“The guys left it all on the field tonight and played their hearts out,” said David Dominique, AHS head coach.

“I am so happy for our guys. They battled all night.”

The Blue Devils, a Division V member of the Chagrin Valley Conference, finished last year with a 2-8 record.

They took an early lead when Isaac Pettway crossed the goal line from 19 yards out in the first quarter.

The Blue Devils’ ground game chewed up nearly eight minutes of the first quarter, had a total time of possession of 29:28 for the contest, and amassed 288 yards on the ground.

Making his debut in the quarterback position, Bryce Williams completed 18-27 passes for 194 yards in Archbold’s 26-21 victory over Wickliffe.– photo by Mario Gomez

“They had some big guys upfront. We didn’t make all the plays, but we made plays when we had to,” said Dominique.

Archbold sophomore Bryce Williams, making his first varsity start at quarterback, scored in the opening minutes of the second quarter on a 1-yard run. Mayer’s pointafter touchdown kick knotted the score at 7.

Williams and Mayer hooked up again just minutes later on a 61-yard touchdown toss for a 13-7 lead.

Williams then crossed the goal line from 4 yards out just before the end of the half for a 20-7 advantage.

“The offensive line knew coming into this game that the weight was on their shoulders, and they responded,” said Dominique.

“They played well tonight, and needed to take care of Bryce.

“He took care of the ball and didn’t make a mistake. Heplayedwithaalotof composure, and he did what he had to do for us to win the game.”

Wickliffe, which won the coin toss before the game, had deferred to the second half. The Blue Devils took the second-half kickoff and chewed up nine minutes before scoring on a 2-yard run by quarterback Dom Zingale. The PAT closed the gap to 20-14.

Wickliffe’s defense stiffened in the third quarter, shutting out the Blue and Gold.

Mayer lost the handle at the 15-yard line on the ensuing kickoff, but regained his composure and headed into the heart of the Devils’ coverage.

Mayer cut right, avoided tacklers, headed down the AHS sideline, and outraced all defenders for an 85-yard touchdown.

The two-point PAT attempt failed, but the Streaks held a 26-21 lead with 57 seconds left.

“I don’t think Seth came off the field tonight,” said Dominique. “Hats off to him.

“The touchdown run– well, I don’t have a word for that. It was great. I saw the hole open up and Seth hit it. It was awesome.”

Wickliffe fielded a short kick, starting at its own 40.

Zingale crossed midfield with a completed pass to the Archbold 46, and Nick Fenton picked up 16 yards on the ground down to the 30.

On second-and-10 from the 30, Zingale spotted a wide-open receiver in the end zone, but the Blue Devil couldn’t handle the pass.

Facing third down, Zingale took the snap and was met by a host of Blue Streaks, dropping him back to the 45 and sealing the win.

Williams completed 18- 27 passes for 194 yards and passed for 10 first downs in his debut.

Mayer was the workhorse for AHS, hauling in seven receptions for 113 yards.