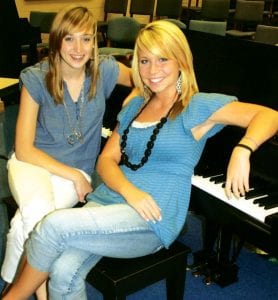 Out of the thousands of student vocalists in Ohio’s high schools, only 180 are chosen to participate in the Ohio Music Education Association’s All-State Honors Choir.

Another 16 are picked to be alternates; if any of the original 180 misses just one rehearsal, the alternate steps in.

Bailey Mayer, an AHS senior, was picked for the choir; Haley Behnfeldt, another senior, is an alternate.

“It’s a special, incredible accomplishment, for sure,” Meyer said.

Behnfeldt said her classmates congratulated her, “but they don’t understand how many try out. They don’t realize how important it is.”

It’s the first time in a few years Archbold students have been selected for the All-State Choir.

Choir starts at the All- County level. Mayer said she made it to the All-District level.

“Last year was the first year I made to districts,” Mayer said.

To audition for All-State, students are required to sing a full piece of music, then sing a set of scales, ascending and descending. Their voices are recorded on compact disc, then forwarded to judges.

That was at the end of the last year. Students were told they would be notified in August.

“So many people try out,” Behnfeldt said. “You want to make it, but you don’t want to spend all of your time thinking about it, because you might not make it.”

Mayer said while waiting for her letter, “I totally defeated myself.”

Both girls said they received their letters on Sept. 1.

There are six rehearsals around the state. Students are allowed to choose two of the six. There’s also a final rehearsal at Ohio State University, Columbus, before the show.

Vandock said the music ranges from pieces 200 years old to music from other cultures. Sometimes, an original choral piece will be premiered.

But beyond that, it’s a chance to meet other vocal musicians.

“It will be incredible. There will be so many musically inclined people in the same place, at the same time,” Mayer said.

“Even at districts it was amazing, because everyone cared; everyone liked choir. They weren’t just in it to get an art credit,” Mayer said.

Mayer said music “is my passion and my inspiration.”

Her sophomore year, she had one of the lead roles in the AHS musical, “The Music Man.”

After that, “I quit sports and everything, because I realized music was my passion. I realized this was where I was supposed to be,” she said.

She said she doesn’t want to be a music teacher, though. She is interested in some kind of musical career, possibly music ministry.

Behnfeldt said she’s looking at art as her career field, “but I want music to be part of my life.”

Behnfeldt said she tried out for the AHS show choir, The Company, and made it.

“I was so surprised. I love to sing,” she said, but she didn’t know that she had a talent for singing.

Both listen to Christian music. Neither likes rap.

Vandock agreed with Mayer– the All-State Choir will be a chance to meet other student vocalists, make connections, and start new friendships.

But he said the All-State Choir will challenge both girls “and cause them to grow” as musicians.