May Unemployment In Fulton Co. Was 7.4% 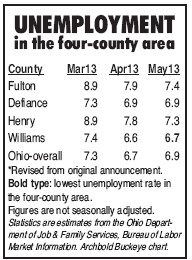 The Ohio Department of Job and Family Services estimated that for the month of May, unemployment in Fulton County was 7.4%.

That figure is down onehalf of one percentage point (.5%) from the April figure of 7.9%.

While down, the Fulton County rate remains the highest in the four-county area.

Defiance County unemployment remained unchanged at 6.9%, while the rate in Henry County fell one-half of one percentage point (.5%), to 7.3%.

ODJFS estimated that there were 22,000 workers in the Fulton County labor force, the largest in the fourcounty area.

Fulton County was in a four-way tie for the 32ndhighest unemployment rate out of the 88 Ohio counties.

Other counties with 7.4 % unemployment were Marion, in central Ohio; Harrison, in east central Ohio, and Athens, in southeastern Ohio.

Fulton County’s 7.4% rate is the lowest unemployment has been in 2013.

The highest rate recorded for Fulton County was 16%, in January 2010.

During May, six counties in eastern or southern Ohio had unemployment rates of 10% or higher.

The highest was in Pike Township in south-central Ohio, at 11.9%.

Mercer County, on the Indiana border in central Ohio, had the lowest rate, at 4.3%.

All county unemployment data is not seasonally adjusted. Unadjusted May unemployment rates for Ohio and the United States were 6.9% and 7.3%, respectively.

When seasonal adjustments are applied, the Ohio rate becomes 7%. The national rate rises to 7.3%.

During May, ODJFS estimated Ohio had a labor force of more than 5.75 million workers.