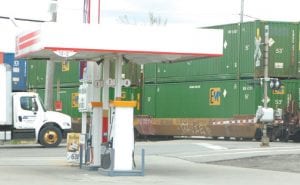 A train loaded with shipping containers blocks the Defiance Street Norfolk Southern railroad crossing, Friday, May 10. Reports say the crossing was blocked as early as 1 pm.– photo by David Pugh

Speaking to council at its Monday, May 20 meeting, Wixom said the situation was “a lose-lose situation for us, because we got the downtown cleared out, but then we created another problem over on Stryker Street.”

Wixom said the problem started at about 1:30 pm, when an NS train stopped, blocking the two downtown crossings, although there are reports of the crossing being blocked as early as 1 pm.

By 2 pm, a second train was stopped in the crossings.

Tera Rogers, an APD officer, contacted Norfolk Southern police, who said they didn’t know why the train (singular) was stopped in the crossing, but it would be moving in 15 minutes.

And in 15 minutes, one of the two trains did get underway.

Within a half-hour, between 1:30-2 pm, traffic backed up to West Barre and Lutz roads.

“Of course, semis were down there, and 53-foot semis are hard to move in those tight quarters.”

On the north side of the tracks, the officer “was able to put one in the middle turn lane, and others in the southbound Defiance Street lane,” Wixom said.

“We had to do that to get the traffic to be able to get moving.”

But by the time traffic was moving again, school dismissed, “and parents couldn’t pick up their kids on Stryker Street because of the flow of traffic, and semis continued to flow down Stryker Street.”

Wixom said he couldn’t address traffic on the south side of the tracks.

“I had two officers out. I didn’t want to tie up (one officer) in traffic control in case an emergency came out,” Wixom said.

The remaining train began moving at about 3:08 pm.

Wixom said he had been in contact with Bob Latta, U.S. congressman (R-Bowling Green) representing Archbold.

Wixom said a staffer in Latta’s office had a contact with the Federal Railroad Commission, “and he’s (the staffer) going to get the ball rolling, hopefully, with that,” Wixom said.

“What they’re looking at, first off– they have requested Norfolk Southern manage- ment (to come to) to Washington. Whether that’s going to happen, I don’t know,” Fryman said.

“The other thing was that they were looking at policy changes in order to help.

“It’s not just through here. It’s… the length of their system.

“I said, ‘you know, it’s ridiculous that they can stop (an eastbound) train before Co. Rd 21 and that train completely covers both of our crossings.’

“I know we’ve talked about breaking trains (so one crossing is open), and that’s happened maybe twice.”

Fryman told Wixom, “You guys need to do something more than what’s happening, because, you know, our small town of 4,300 turns into a town of 8,000 five days a week.”

Fining the railroad is not enough, because the fines “are a drop in the bucket” to them (NS).

“Something else needs to happen,” Fryman said.

This newspaper emailed Latta’s office Friday, May 10, at about 4 pm, advising him of the situation.

Copies of the same email with photos attached of the congestion went to Wixom and Fryman.

The following Wednesday, May 15, Latta responded to the Buckeye with this statement:

“The continued blocking of intersections in Archbold is unacceptable.

“Although there has been some confusion over jurisdiction of this issue, my office is actively involved in trying to find a solution to this ongoing problem.

“The easiest fix would be for the railroad companies to not block intersections, but if they must, to coordinate with local officials– especially emergency personnel.

“If they are unable to fix this problem themselves, steps at the federal level will be taken.”

Morton said on Friday afternoon, May 10, two of his employees and Mary Huber, Archbold Buckeye co-publisher, were out in the street assisting truck drivers to find their way around the snarled traffic.

His employees, he said, had even printed maps directing truck drivers around the crossing.

He said one truck sat on South Defiance Street for two hours.

The driver said he was told by his dispatcher if he attempted to travel down Co. Rd. D to get to the railroad underpass on Clyde’s Way, he would be ticketed by police.

Eventually, trucks did clear out.

“So my thought was, as a public service, knowing that we have this issue, what can we do so that my employees aren’t out there, but I’m thinking that we should be able to come up with a mechanism to help get them (semis) out of downtown and get them on their way,” Morton said.

Wixom suggested calling in overtime officers to reroute traffic around the crossings, but Morton said, “I think at that point, it’s too late. The trucks are already stuck.”

Wixom said some truck drivers said they couldn’t deviate from the state highway, “and I’m like, listen, I’m a policeman telling you to. You better do it, or we’re going to go call a wrecker for you and get it moved. So they ended up finally getting moved.”

Wixom told council he had received no answers from NS as to why the trains were stopped, or why the crew didn’t break the trains.

Crews on the trains won’t talk to police officers, only referring them to a corporate phone number.

Wixom said he once asked about a stopped train and was told the crew members were out of time they were allowed to work.

They said they couldn’t even separate the train and move enough to clear a crossing.

Eicher again called for a joint effort between the Fulton County Commissioners, German Township, and the village to find a solution to the problem.

“We did,” Morton said, referring to a failed attempt to reroute St. Rt. 66 on Co. Rd. 24 and build a second overpass.

Fryman said during the incident, he was getting text messages about the problem.

One was from Jeff Aeschliman, German Township road maintenance worker.

In a later interview, Aeschliman said, “I just casually mentioned the train being stopped downtown. We’ve always joked around.”

Fryman told council his response to Aeschliman was, “Well, you guys own a backhoe, why don’t you start digging a tunnel?”

Asechliman said the township backhoe happened to be parked outside, so he took a picture and sent it to Fryman with the words, “We’re on it.”