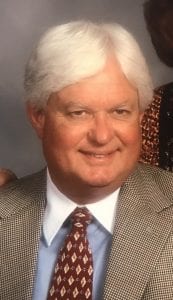 Max Eugene Stuckey of Archbold, age 73, died peacefully at ProMedica Toledo Hospital on Sept. 8, 2017, with family at his side.
The middle of five children born to Denver and Frances Stuckey, Max was born Jan. 8, 1944, in the family home in Archbold.
A lifelong resident of Archbold, Max was a career livestock and property auctioneer and a real estate businessman, having learned the skills necessary for these occupations from his father, Denver.
As a real estate salesman and then broker, Max was a principal at Stuckey Realty for 55 years, retiring the family business in 2016.
He was a lifelong member of the National Realtors Association and served for many years on the Northwest Ohio Board of Realtors.
Max’s true calling, however, was manifest in his abilities as an auctioneer.
At the age of 16, he started working as an auctioneer at Lugbill Brothers Livestock Yard in Archbold. His keen knowledge of the markets made him an area expert in commodities.
It was his voice, though, and gregarious, idiosyncratic personality, that set him apart in the auctioneering world.  His rhythmic chant and pension for bid calling were talents shared by few, perfect for an occupation seen by many as a tool of a bygone era; part salesman, part showman, no one did it better and no one worked harder for their customer.
Auctioneering brought Max much acclaim and success, having been a finalist at the 1970 Ohio State Fair Auctioneering Contest and a regional finalist at the 1975 World Livestock Auctioneering Contest.
He also served on the Board of the Ohio Auctioneers Association.
Auctioneering also became the primary vessel by which he gave back to his community. For nearly 50 years, Max volunteered his time and rare skill to charity events including the Sunshine Children’s Home Benefit Auction, Fairlawn Haven Benefit Auction, ProMedica Defiance Regional Hospital ProAm and Kaitlyn’s Cottage Benefit, numerous area church benefits and many others.
Additionally, he was deeply involved in many of Northwest Ohio’s 4-H and FFA organizations, for years auctioneering at the area’s county fairs and sitting on many of the areas advisory boards.
In his personal life, Max was a devoted husband to Sharon for 49 years, a beloved father, grandfather and uncle. He was a friend and trusted confidante to many, whether they had or had not.
He was a lifelong member of Zion Mennonite Church in Archbold.
He was a dedicated member of the Archbold Area Rotary Foundation, who at several points served as its president.
He was a master grill and barbeque chef who enjoyed cooking for thousands at community events as well as for his family.
He loved to travel with favorite destinations including Isle of Palm and Charleston, S.C., southern California, New Orleans, La., Washington, D.C., Nashville, Tenn., and Chicago, Ill.
He loved sports, playing basketball in his youth, and was a lifelong fan of the Chicago Cubs, the Chicago Bears and The Ohio State Buckeyes.
Most enjoying to him, however, was being able to watch his son, nieces and nephews, and then eventually grandchildren and great-nieces/-nephews play sports for the Archbold and Tinora sports programs.
More then anything, he enjoyed spending time with his family and friends. He will be missed dearly, remembered fondly and loved forever.
Max was preceded in death by his parents, Denver and Frances Stuckey; his mother-in-law, Geraldine Glenn; his brother, Bud Stuckey; his brother-in-law, Paul McFarland.
He is survived by his wife, Sharon; son, Dr. Jordan (Amanda) Stuckey; sisters, Charlene (Jamie) Beck and Sara (Paul) McFarland; brother, David Stuckey; sisters-in-law, Cathie (Bud) Stuckey and Cindy (Steven) McIntosh; grandchildren, Chris, McKenna, Grayson, Addilyn, Rex Oliver and Max Henry; nieces, Ladonna (Jerry) Andres, Lynette (Phil) Bontrager, Dr. Ashley Stuckey, Stacia (Derek) Kuhen, Kari (Jeff) Keown; nephews, Kent (Karen) Beck, Kerry (Mary Beth) Beck, Marshall (Elissa) Stuckey, Christopher McFarland, Dr. Patrick (Kristen) McFarland and Mark McFarland.
The family wishes sincerest thanks to the nursing and medical staffs at ProMedica Defiance Regional Hospital and ProMedica Toledo Hospital for their warm care and unyielding compassion during the times dad was in their hands.
Visitation will be held from 2 p.m. until 8 p.m. on Thursday, Sept. 14, 2017, at Zion Mennonite Church in Archbold. A Celebration of Max’s Life will be held at 11 a.m. on Friday, at Zion Mennonite Church, with Pastor Jessica Schrock-Ringenberg and Pastor Corben Weaver Boshart, officiating. Interment will be in the Pettisville Cemetery.
The family requests that memorial contributions be given to Rotary International Scholarship Program or Zion Mennonite Church.
Grisier Funeral Home in Archbold has been entrusted with arrangements. www.GrisierFH.com. –Posted 9.11, 9:25 am