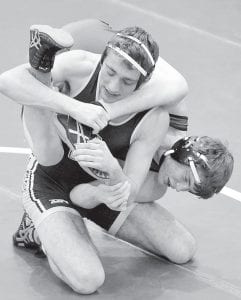 Garrett Grime tries to score on a leg attack for a takedown of Swanton’s Tyler Houston in the NWOAL championship semifinals.– photo by Mario Gomez

“This is probably the first time that everybody we wrestled has placed in the top six. Some of that has to do with numbers so low– with some of the league teams, too. 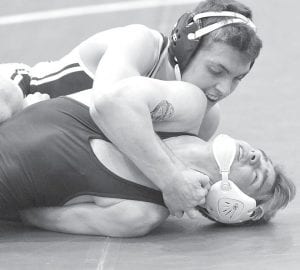 “I kind of projected 13 of the 14 weight classes (in our league) are gonna have a state placer in it, so that’s a testament to the top ability of the league.

“It just doesn’t have the depth it once did, but the best guys– they’re every bit as good as they’ve ever been.”

Archbold’s newest wrestler is not new to the NWOAL scene.

Mattin, a transfer from Delta, was a league champion two years ago at the same weight.

After missing last season, the junior came back with a vengeance to reclaim his title.

The top-seeded wrestler defeated Bryan’s Deane Ramey by fall, then recorded another fall against Montpelier’s

Logan Hutchinson to reach the finals.

In the finals, Mattin defeated a very game Gage Campbell from Wauseon, 8- 3, to claim the 126 lb. title.

“He’s just starting to wrestle pretty decent in the last week, just because of being off the mat for so long,” said Becher.

“He finally made the drop to 126 last week, so I’m interested to see how he does here when he settles more into the weight class through the post-season.”

After two straight runner-up finishes in the NWOAL tournament, Garrett Grime finally got over the hump to claim his first league championship.

Grime scored a 10-0 major decision over Swanton’s Tyler Houston to advance to the championship finals.

Grime earned his place on the top of the podium with a 7-3 win over Delta’s Travis Barnes.

“He’s lost four go-to-state matches and the league title match last year, so it’s good to see him get a win when the pressure is on here at the end of his senior year.”

With just under two weeks before returning to the mats, the Streaks will prepare for the individual part of the season and look to qualify as many wrestlers for the postseason as possible.

“I think we’re gonna really work on conditioning and getting our guys to wrestle hard throughout the match.

“We’ve never had a layoff like this before, so it is gonna be a little bit different.”