Matthews, Master Of Glass, Practices His Art At Sauder Village 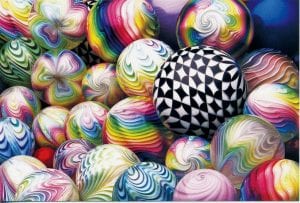 Mark Matthews creates amazing colorful spheres out of glass. When working with spheres, “you had permission to be anything: animals, black and white, abstract. It just opened things up.” He added since spheres don’t have a top or a bottom, they invite observation from all angles.- courtesy photo

Mark Matthews is a master of glass, creating beautiful spheres of graphic design and fascinating color.

You only have to spend a few minutes with him to see his extreme enthusiasm and passion for the art.

As a glass artist-in-residence at Sauder Village, Matthews began his career in 1974 when he was an art student at Kent State University. Matthews came to Sauder Village in 1985.

“I use this massive glass history as a playground to pick and choose aspects that have been developed by others. I stand on the shoulders of giants. I couldn’t possibly be responsible for all of this,” he said.

He is inspired by other artists through their showmanship, charisma, or technical aspects of their work. 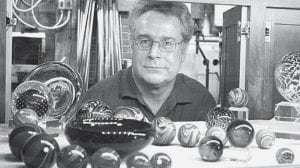 Mark Matthews with some of his glass items in his Sauder Village workshop. He is known for his glass spheres.- photo by Rita Bilen

“It’s always been my quest to pursue world-class activity in my material discipline,” he said.

In working with spheres, he found liberation.

With this medium, “you had permission to be anything: animals, black and white, abstract. It just opened things up.”

Most things have a top and bottom, but his spheres don’t.

“They invite observation from all angles, which is interesting,” said Matthews.

Challenges glass artists face are cost of materials, tools, level of concentration, and degree of difficulty.

“This is the most expensive privately-funded activity happening at the village,” he said.

It takes a mastery of understanding the properties of glass and color to create the intricate designs. His inspiration gives him a reason for developing new technical ways of working with glass.

Matthews’ works are displayed throughout the world, including the Sphere Museum in Tokyo, Japan. He also has pieces at the Corning Museum of Glass in New York. Others are on display in the Victoria and Albert Museum in London, as well as the Toledo Museum of Art.

He won an award for innovation in glass for his letters (A-Z) and numbers (0-9).

His Population Portraits are groupings of spheres carefully placed inside a large glass cylinder.

“There’s only so much information I can pack into a single sphere, so a lot of what I do is based on the relationships between them,” said Matthews.

One unique collection Matthews has developed is animal skins. By using photographs of animal skins, he uses a masking technique to recreate the authentic animal skin pattern, which is “dead accurate to a specific animal,” he said.

He has used Bengal tigers, cheetahs, jaguars, and giraffes.

Besides his work on display around the globe, Matthews was recently recognized in another way.

Robin Lehman, an academyaward winning documentary filmmaker, came to the village to film Matthews at work.

“We hustled like crazy for a week and a half to get ready (before he came),” said Matthews.

“I did a different thing every morning and every afternoon. I never do that.”

Matthews believes that Lehman chose him, in part, due to “the zaniness of my personality.”

But in being recognized, Matthews modestly turns the focus on the village and how it “interfaces with not only the community, but with the world of material disciplines.

“The only future that exists is with ruthlessly pursuing excellence and world-class activity.

“Because otherwise, why bother?”