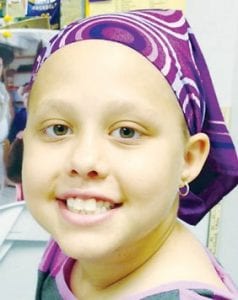 If the power of love alone could cure cancer, nine-yearold Madison “Maddy” Lambert wouldn’t have a care in the world.

She has fought leukemia since late 2009, but she hasn’t fought by herself.

Family, friends, classmates, boys and girls from two school districts, and an entire community have supported her throughout her battle.

In March 2011, members of the Archbold High School basketball team and several members of the school administration staged a fundraiser, in which their heads were shaved to show solidarity with Maddy.

But the power of love alone is not enough.

All it involves is filling out a single sheet of paper and having the inside of both cheeks swabbed with a cotton swab, Saturday, Dec. 15, starting at 10 am at AHS.

Even if a person isn’t a match for Maddy, the information will go into a national registry. Someday, that donor could be a match for another person, possibly a stranger.

A test revealed leukemia cells in her spinal fluid.

As it is her second relapse, Hurst said the next step for her is a bone marrow transplant.

The challenge is finding a donor who is a match. It isn’t easy.

The best candidate for a match is a full-blooded sibling.

Julia, Maddy’s 14-year-old sister, was tested, but is not a match.

Hurst said the doctors’ first goal is to get Maddy back into remission. To that end, she has started chemotherapy.

Hurst said she did some research and turned up DKMS, an international organization that recruits potential donors.

Hurst called a DKMS recruiter in Nashville, and got the ball rolling.

The kickoff for the bone marrow donor drive was Monday, Dec. 3. Hurst said 27 people, including teachers and community members, attended.

With the help of DKMS, they were able to put the program together in less than three weeks.

On Saturday, Hurst said about 50 volunteers, including teachers, community members, and high school students including National Honor Society and Fellowship of Christian Athlete members, will be ready to assist.

A representative of DKMS will also be at the event.

Donors will be met at the front door of AHS and escorted to the small, or freshman, gym. Potential donors will be led through five stations, Hurst said.

Station 1 is an information station, where potential donors are made aware of guidelines for becoming a donor (see chart).

Station 2 is paperwork. The potential donor is asked to fill out a one-page form with contact information.

Hurst said Station 3 is the “donation station.” She said it costs about $65 to process each swab and put the information in the registry, but the cost is never passed on to the donor.

Instead, each will be asked if they would like to make a donation to the cause.

Station 4 is the actual swabbing.

Swabs are then placed in an envelope.

Station 5 is the final stop, where the envelopes, with bar-coded stickers, are collected.

Hurst said those who put together the drive have made efforts to get the word out. Their efforts range from contacting the media, to asking churches in the fourcounty area (Fulton, Defi- ance, Henry, Williams) to put notes about the drive in their bulletins.

As of Monday more than 5,000 invites to the bone marrow donor drive, called “Match for Maddy,” were sent through the social media website Facebook.

As of Monday, more than 400 people have said they will come to the drive.

•Be between 18 and 55 •Be in good health •Weigh more than 110 pounds, but have a body mass index less than 40 (a person 6 feet tall can weigh up to 295 pounds) •Not be HIV positive, or have AIDS •Have not had heart disease or heart surgery •Not have autoimmune disorders, such as lupus, rheumatoid arthritis, or multiple sclerosis •not have sleep apnea, breathing problems, or severe asthma (daily inhalers allowed) •Not be an insulindependent diabetic •Not have Hepatitis B or C •Not have kidney or liver disease •Not have had a stroke or TIA •Not have chronic or severe neck or back problems •Not have epilepsy, or have had a seizure within a year •Not have a blood clot or bleeding dis- order •Not had a history of cancer (some Stage 0, in situ cancers, and cured localized skin cancers acceptable.)

•Genetic information from the swab will be tested for the donor’s tissue type, and the information will be listed anonymously on a registry until the age of 61. Donors are asked to keep their con- tact and health information up to date with the registry.

If the donor is found to be a match

•Stem cells can be collected either from blood, or from bone marrow. •If collection from the blood stream is selected by the recipient’s doctor, blood will taken from one arm, passed through a machine that separates stem cells, and then returned to donor through the other arm. •If bone marrow is required, it is taken from the donor’s pelvis while under general anesthesia.