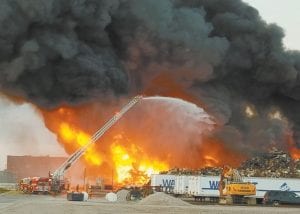 Fire rages through a large pile of scrap metal at the MetalX facility west of Delta just before 8 pm, Monday, Sept. 9. Fire departments from at least six northwest Ohio counties and two southeast Michigan counties worked together to fight the blaze, which is said to be contained on company property. As of Tuesday morning, the fire was still burning.– photo by David Pugh

A massive fire continued to burn in a large pile of scrap metal at the MetalX scrap yard near Delta, Tuesday morning, Fulton County officials said.

Monday night, Sept. 9, those with a clear view of the horizon could easily see the smoke from the fire.

MetalX is a metal recycling firm located on the northeast corner of the intersection of US20A and St. Rt. 109, on the west side of Delta.

The fire spread quickly through the scrap pile, which was at least three stories tall in places.

It advanced west, assisted by a slight, but steady, wind from the east.

A Fulton County sheriff dispatcher said the first call for firefighters went out at 6:09 pm.

Crews from 30 fire departments, including Archbold, fought the fire.

In a press release issued early Tuesday afternoon, Scott Smith, Delta fire department, said the fire started and developed “in a pile of scrap metal feedstock at their shredder infeed.”

“Some portions of the fire are still going, but crews are maintaining a line and keeping the fire away from buildings.”

Firefighters deployed “multiple master streams to quench the fire and heavy equipment to pull the piles of scrap and debris apart.

“They continue to work alongside MetalX company crews, who are trained to use material handling equipment, to help move and separate the material to minimize the effects of the fire.

“The cause of the fire is not known and will remain under investigation,” the press release said.

On Tuesday, officials of the Ohio Environmental Protection Agency were on scene and were conducting air quality tests.

Federal EPA officials were on their way to conduct additional tests.

MetalX has an environmental consultant, who was to be on site conducting further tests Tuesday afternoon.

Emergency officials asked people to stay out of the smoke and shelter in place when possible.

In the release, Miller said the potable (drinking) water connection with Wauseon was opened, allowing Wauseon water to flow into Delta.

The release said there were 30 fire departments at the fire scene Tuesday.

Among the equipment observed at the scene were Archbold aerial ladder truck No. 101 and tanker No. 106, the large (3,500 gallons) Stryker fire tanker, and units from Providence Township, Sylvania, and the 180th Ohio Air National Guard based at Toledo Express Airport.

During the battle against the blaze, one firefighter was injured. Media reports say the firefighter hurt his ankle.

Donations for firefighters, such as food and drinks, are being handled through the Red Cross.

(Additional photos and video may be viewed on the Archbold Buckeye Facebook page).