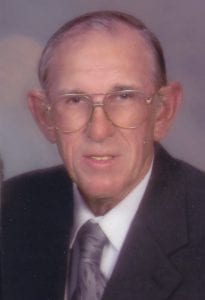 Marvin F. Radabaugh, age 76, of Edgerton, died at 1:25 p.m. on Tuesday, June 24, 2008, in his home after an illness of one year.
Mr. Radabaugh was a 1949 graduate of Edon High School and a veteran of the United States Army, serving in the Korean Conflict with the 2nd Division, 23rd Regiment from 1952-1953. He was a lifelong dairy farmer with Radabaugh Farms near Edgerton.
He was a member of St. Mary Catholic Church in Edgerton; John D. Smith Post #10 of the American Legion, of which he was Past Commander; Knights of Columbus Council #1494 in Edgerton, of which he was Past Grand Knight; the Williams County Dairy Association, of which he served as Past President; and was a Board Member of Williams County Landmark.
Mr. Radabaugh was an avid sports fan of the Edgerton Bulldogs and of the University of Notre Dame, South Bend, Ind., where he served as an usher at Notre Dame football games.
Marvin F. Radabaugh was born on Nov. 2, 1931, in Blakeslee, the son of John Waldo and Martha Josephine (Held) Radabaugh. He married Evelyn M. Goebel on Oct. 24, 1953, in Edgerton, and she survives.
In addition to his wife, Marvin is survived by his children, Linda (Tom) Everetts and Anthony (Amy) Radabaugh, both of Edgerton, Sue (Rich) Smethurst, of Bryan, Deb (Roger) Schroeder, of Edgerton, Cindy (Ralph) Krueger, of Archbold, John (Jodi) Radabaugh and Mary Ann (Gary) Schroeder, both of Edgerton, and Joe (Jacque) Radabaugh, of Edon; 27 grandchildren; and eight great-grandchildren. He is also survived by two brothers, Cletus (Mary Lou) Radabaugh, of Blakeslee, and Loman Radabaugh, of Archbold, and one sister-in-law, Pat Radabaugh, of Montpelier.
He was preceded in death by an infant son, Steven Ray Radabaugh, and three brothers, Ralph, Eugene, and Leon Radabaugh.
S   ervices for Marvin F. Radabaugh will be on Saturday, June 28, 2008, at 10:30 a.m. in St. Mary Catholic Church in Edgerton, with Father Stephen Schroeder and Father Thomas Oedy officiating.  Interment will follow in St. Mary’s Cemetery with graveside military rites conducted by John D. Smith Post #10 of the Edgerton American Legion.
Visitation will be in the Krill Funeral Home, Edgerton, from 6-8 p.m. on Thursday, June 26, and after 2 p.m. on Friday, June 27.  Recitation of the rosary will be Friday at 8 p.m.
Memorials in the name of Marvin F. Radabaugh may be given to St. Mary’s School, Cancer Assistance of Williams County or Community Hospital and Wellness Centers-Hospice Care.
Condolences may be sent to and the online register signed at www.krillfuneralservice.com .