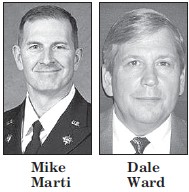 The Archbold American Legion Post, Buehrer-Lauber Weckesser Post 311, will hold its Memorial Day service beginning at 9:30 am at the Knights of Columbus Rebeau Hall.

Archbold Legion members will travel to Pettisville for activities there.

In case of inclement weather, Pettisville Memorial Day services will be conducted at the school.

The Archbold and Pettisville high school bands will perform in their respective communities.

New this year at Ridgeville is a Chicken BBQ dinner sponsored by the Sons of the American Legion.

A continuing tradition of the Ridgeville Legion is the children’s flag drill.

Youngsters pre-kindergarten through fourth grade are invited to practices on Tuesday through Thursday, May 22-24, at 6:30 pm at the Legion Hall.

The AHS marching band will perform at Ridgeville.

The Ohio Air National Guard 180th Tactical Fighters Squadron will conduct a fly-over at 11:45 am.

Members of Post 454 will attend services Sunday, May 27, 8 am, at the St. Paul Lutheran Church, Napoleon Township.

Marti, AHS ‘85, will speak at the Archbold and Pettisville services.

He is a 1989 graduate of The Citadel, The Military College of South Carolina.

As Marti has climbed through the ranks of the Army, he has served in Korea and the Middle East.

In 2005, he was sent to the Pentagon as chief of the Iraq Intelligence Cell, providing strategic intelligence on Iraq to the nation’s leaders.

He currently attends the U.S. Army War College; he is a member of the Eisenhower Series College Program. He will graduate this year with a master’s degree in strategic studies.

His next assignment is to the Army Capabilities Integration Center in Virginia. The group’s mission is to integrate Army intelligence capabilities to support the nation’s strategic vision for 2020.

His wife, Tanya, is an author whose book, “Under the Sabers; The Unwritten Code of Army Wives,” was turned into a popular television series.

He proposed to her while he was stationed in Kuwait. She was there covering the deployment for the Fayetteville (N.C.) Observer newspaper.

The Martis have two children.

Ward, the speaker at the Ridgeville events, is a retired United States Coast Guard commander.

A 1973 honor graduate of the United States Coast Guard Academy, he has held command positions on both sea and land, and served in a variety of USCG leadership positions.

Now retired, he serves as a management consultant for a wide range of projects. He was the program manager for the design of the United States Naval Ship Howard O. Lorenzen, which was delivered to the Navy in January.

The Lorenzen, using the latest radar equipment, can track objects in space, including ballistic missiles.

Ward is a native of Beaumont, Texas. He and his wife, Pam, have two children.