Martha (Haas) Wagner, age 90, of Wauseon, passed away Friday, Oct. 1, 2010, at the Fairlawn Haven Nursing Home in Archbold.
After her health started to fail in 2009, she moved to Fairlawn Haven, never giving up hope of returning home.
Martha began doing factory work in Bryan at an early age while parents and younger siblings farmed west of Delta. She had also worked at the Dairy Barn (originally Dairy Queen) as one of the first employees.
She worked at Miller’s Grocery Store Bakery and Perfection Finishing along with assisting on the farm, gardening and quilting.
Mrs. Wagner was born in Fulton County, Ohio on April 12, 1920. On June 6, 1942, she married James C. Wagner, and he survives.
She was a lifelong member of Trinity Lutheran Church in Wauseon.
She enjoyed making bags of noodles for the Elks, and enjoyed the Canadian fishing trips (but NOT camping). She trimmed the shrubs and tended flowers and the garden-canning and freezing quarts and quarts of produce. Dad kept up the yard.
Both boisterously washed and waxed their vehicles twice a year while health allowed. She quilted for hours in later years, turning out about one hundred while James tended to kitchen duties and the telephone, even helping put the quilts in the frame.
Surviving besides her husband, James, are children, Sharon (Charles) Riegsecker of Delta, James (Diana) Wagner of Bozeman, Mont., Connie Wagner (Sandra Phibbs) of Knoxville, Tenn.; nine grandchildren; 18 great-grandchildren; five great-great-grandchildren; and three sisters, Amelia Kasper of Wauseon, Rosa (Robert) Williams of Perrysburg, and Irene (Hal) Garrow of Wauseon.
She was preceded in death by one daughter, Debby Calkins; and siblings, KathrynWanner, Anna Weber, Marie Dinius, Bertha Graber, Carl Haas and Laura Mull.
Funeral services will be held at 11 a.m. Monday, Oct. 4, 2010, in the Chapel at Fairlawn Haven Nursing Home in Archbold, with Pastor Tim Sonnenberg and Pastor Charles Gautsche, officiating. Interment will be in the Wauseon Union Cemetery.
Friends may call in the Chapel at Fairlawn Haven on Sunday afternoon from 2 p.m. until 5 p.m.
The family requests that memorial contributions be given to the Susan G. Kommen Race for the Cure or Trinity Lutheran Church in Wauseon.
Online condolences may be offered to the family at www.grisierfh.com.
Edgar-Grisier Funeral Home in Wauseon has been entrusted with arrangements.–Posted 10.2, 5:30 pm 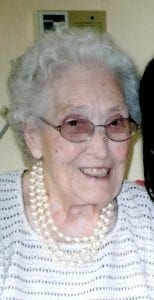