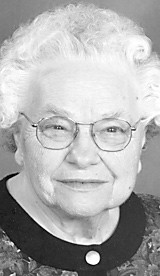 Marjorie was the youngest of six children and grew up on the family farm near Wauseon. She attended Pettisville Schools and graduated in 1946.

On May 4, 1947, Marjorie was married to Harold E. Rupp. Their home was blessed with two children, Steven and Linda.

Harold and Marjorie became charter members of Tedrow Mennonite Church in 1949 and were active in the mission work at Spencer.

Marjorie and Harold lived and farmed in the Archbold area for 18 years before moving to Sherwood, Mich. Together they farmed and raised hogs for another 18 years.

During this time, Marjorie was a cook at the Sherwood Elementary School, and later, at Union City High School.

The two moved to Naperville, Ill., where Harold was the maintenance man at Martin Manor, a retirement complex. Marjorie cleaned resident apartments and enjoyed time with the residents playing card games and bingo.

In 1987, they retired and moved back to Archbold to be near childhood friends and family.

Harold and Marjorie kept busy playing card games with friends. They were always ready for company and couldn’t wait for the children and grandchild to visit.

Harold passed away unexpectedly in 1996.

Marjorie met Lee Borton at church; he had also recently lost his spouse. Their friendship grew and they were married on July 8, 2000.

Marjorie continued to spend time with friends. She became reacquainted with a childhood friend, Dale Gautsche. You could find the two of them playing cards, going to breakfast, and taking long drives around the country.

A memorial service was on Monday at 11 a.m. at the Tedrow Mennonite Church. Interment preceded at 9:30 a.m. in the Pettisville Cemetery.

Memorial contributions may be made to Mennonite Central Committee, https://mcc.org/.

Short Funeral Home in Archbold was entrusted with the arrangements. www.ShortFuneralHome.com.