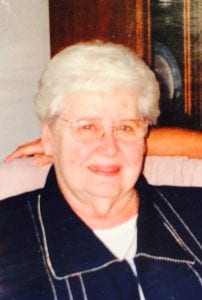 Marilyn A. Nofziger, age 88, of Archbold, passed away Wednesday, Aug. 27, 2014, at the Fairlawn Haven Nursing Home in Archbold.
Marilyn had worked at the McLaughlin Memorial Public Library in Archbold for 16 years, and then worked in the office at the Archbold Elementary School for 26 years.
Marilyn was born in Chicago, Ill., on Feb. 12, 1926, the daughter of the late Frank and the late Nellie (Apple) Swisher.
On July 29, 1945, she married A. Jay Nofziger, and he preceded her in death in 1987.
She was a member of St. John’s Christian Church in Archbold.
Surviving is her “brother,” Bruce Werder of Archbold; “sister,” Barbara Rupp of Archbold; brother-in-law, Richard Nofziger of West Unity; sister-in-law, Madelyn Nofziger of Pennsylvania; and nieces, nephews, and cousins.
She was preceded by her husband, Jay.
Visitation for Marilyn will be held from 1 p.m. until 2 p.m. on Sunday, Aug. 31, 2014, in the Chapel at St. John’s Christian Church. The funeral service will follow at 2 p.m., with Pastor Erich Christman and Pastor Adam Just, officiating.
Interment will follow in the Floral Grove Cemetery, near West Unity.
The family requests that memorial contributions be given to Fairlawn Haven Nursing Home.
Grisier Funeral Home in Archbold has been entrusted with arrangements. Online condolences may be offered to the family at www.grisierfh.com.-Posted 8.29, 9:55 am