Many Characters, Only Six Actors In ACT Show 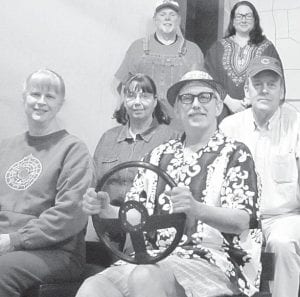 There are only six actors in the Archbold Community Theatre production of “Leaving Iowa,” but there are a lot of characters.

“Leaving Iowa” is a comedy about the family road trip, reliving the memories of being cooped up in a car with siblings for an extended period of time.

Randy Stuckey, West Unity, has the toughest job, as he portrays 13 separate characters.

“You have to make sure you remember which character you are and which one you will be next,” he said.

At some points, Stuckey leaves the stage as one character, but only a few lines of dialog later, he has to return to the stage as another– with a costume change in between.

“Costume changes need to be carefully choreographed,” he said.

Randi Ross, Napoleon, a newcomer to the ACT stage but a veteran of other community theatres, has nine characters she must perform on stage.

“Sometimes I feel like I need to have a split personality to portray the multiple roles,” she said.

Bill Phelps, Archbold, has the role of Don Browning, the show’s central character. Don tells part of the story through his own flashbacks, and, as such, Phelps must be both adult Don and youngster Don.