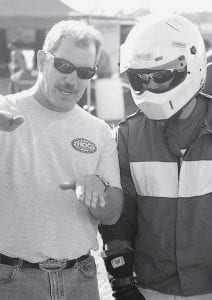 John Huffman, veteran Archbold kart racer, said there were 79 entries. That figure is down from last year’s 120, but Huffman said the racers that did enter were among some of the best.

That was demonstrated by the relatively few caution flags that flew during the heat races and feature events.

Vehicles are moved off the lot, and a temporary oval track is set up, using hay bales.

Several local racers settled for second places in the features. Graeme Short, 10, Archbold, finished second in junior econo after dueling with Mann. Mike Overmier picked up a second place in stock light, and Mark Frey was second in senior econo. Huffman took second in stock 400, after leading the feature event. 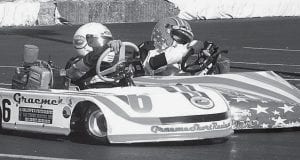 Graeme Short, 10, Archbold, kart number 6, challenges Hope Bolton, 11, Defiance, for the lead of the junior econo feature in between turns one and two at the Terry Henricks Mopar Classic, Sunday, Oct. 12. The race was eventually won by Jeremy Mann, 13, Archbold, with Short settling for second place.Bolton did not finish the race. – photo by David Pugh

Danielle Frey, Pettisville, had an engine failure in the senior econo feature, but the weekend was not a complete loss for her.

Friday night, Oct. 10, at the Jackson, Mich., track, she won her feature, which clinched the senior econo points championship for her.

She’s been the class champion for three years running.

Kyle Beck, 13, Pettisville, was leading the junior econos when the drive chain on his racer broke, putting him out.- information provided by John Huffman, written by David Pugh 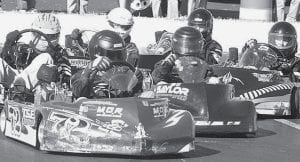 Archbold’s Mike Overmier, kart no. 72, leads the stock light class feature race in the early going between turns one and two. Overmier had to settle for second place in stock light and a third place in the stock medium class. Note the marks on the kart’s bodywork, indicating contact with other racers.- photo by David Pugh