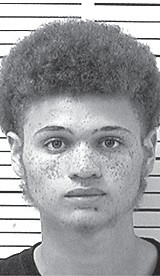 He was indicted by a Fulton County grand jury March 20 on five counts of grand theft, three counts of theft, and two counts of receiving stolen property.

The charges resulted from thefts committed on or about March 1-6.

Jeremy Simon, a sheriff deputy, was dispatched about 9:32 pm, Monday, July 31, to investigate a suspicious vehicle at a truck stop near Delta. When he approached the vehicle, it sped away.

As Simon and his police dog approached the vehicle, the passenger, identified as Skye Thibodeaux, 18, got out and ran into a cornfield.

The driver then opened his door, and as he was getting out, fired four shots from a .40-caliber handgun, striking Simon twice below his left armpit. The bullets entered his body at a point not covered by his bullet-resistant vest.

Simon was flown by helicopter ambulance to Toledo Hospital. He was released about 48 hours later and reunited with his dog. He was back on the job after about a month.

Gilmore was believed to have fled on foot until he stole a vehicle from an area parking lot.

The Fulton County Crime Stopper phone line received a tip about 3 pm, Tuesday, Aug. 1, that Gilmore was at a residence on Upton Avenue in Toledo.

By 3:10 pm, Toledo police visited the location and arrested Gilmore on a charge of attempted murder. The arrest was without incident.

After questioning Gilmore, he was booked into the Corrections Center of Northwest Ohio, where he has remained, on a $1 million cash bond (10% not allowed).

He was indicted a second time by a Fulton County Grand Jury on Aug. 21. The nine-count indictment charged him with attempted aggravated murder, two counts of felonious assault, having weapons while under disability, failure to comply with the order or signal of a police officer, receiving stolen property, grand theft of a motor vehicle, breaking and entering, and assaulting a police dog.

Gilmore entered guilty pleas to failure to comply, having weapons while under disability, attempted murder, and grand theft of a motor vehicle.

Haselman said on the night of July 31, Gilmore “engaged in conduct that, if successful, would have caused the death of a Fulton County sheriff deputy who was engaged in his duties at the time of the commission of the offense.”

Haselmen said Gilmore could be sentenced to a maximum of 31 1/2 years in prison. He remains at CCNO pending sentencing.

After running into the cornfield to elude capture, Thibodeaux returned and surrendered.

She was arrested on charges of obstructing justice and obstructing official business. Originally she had a Delta address; current court documents indicate she resides in Lyons.

She was indicted Aug. 21 on two counts of obstructing justice and one count each of receiving stolen property, failure to comply, criminal damaging and endangering, and obstructing official business.

On the same day as Gilmore, Thibodeaux pled guilty to failure to comply and obstructing official business.

She is free on her own recognizance while awaiting sentencing.