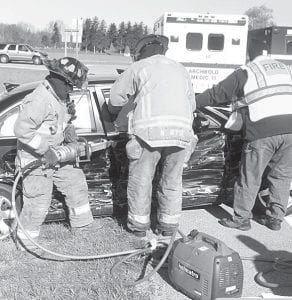 Archbold Rescue workers use the Jaws of Life to free Roger W. Brown, 65, Montpelier, from wreckage, Friday, April 6, when it was involved in a crash at the west intersection of US20A and Co. Rd. 24.– photo by David Pugh

Roger W. Brown, 65, Montpelier, was treated and released at Community Hospitals & Wellness Center- Bryan, after he was injured in a two-vehicle crash Friday, April 6 at 9:31 am.

Archbold Rescue responded to the crash and transported Brown.

Brown was a passenger in a car driven by Carol A. Brown, 60, same address, which was traveling east on US20A.

A sport-utility vehicle, driven by Thomas Bumbaugh, 61, Fayette, was traveling north on Co. Rd. 24. The Fulton County Sheriff Department report states Bumbaugh failed to yield at the stop sign at the intersection, and the two vehicles collided.

Carol Brown and Bumbaugh were not injured. Bumbaugh was cited for failure to yield from a stop sign.