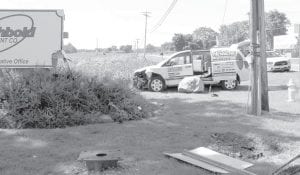 A van driven by Rick Fuller crashed at the intersection of St. Rts. 2 and 66, Tuesday, July 30. The vehicle, which was southbound on St. Rt. 66, went left of center, struck road signs and a large rock, and then hit the sign for Archbold Equipment, finally coming to rest facing east on the other side of the rock, a pole, and a guy-wire. The rock was originally in the bottom right of the photo, next to the knocked-down sign.– photo by Mary Huber

The Ohio State Highway Patrol report states Fuller was driving the minivan, owned by Terry Henricks Chrysler-Dodge-Jeep-Ram south on St. Rt. 66, when the van drifted off the left side of the road, struck road signs, then went across the Archbold Equipment Co., parking lot.

The van struck a large rock, became airborne, struck the Archbold Equipment sign, then came to rest south of the intersection, on the east side of St. Rt. 66.

Fuller was taken by Archbold Rescue to the Fulton County Health Center.

While the OSHP crash report is not complete, troopers have cited Fuller for failure to control.