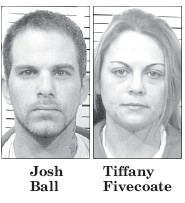 Joshua Ball, 33, rural Archbold, has been sentenced to community control on charges in both Fulton and Williams Counties, information from prosecutors’ offices in both counties states.

Ball was captured by Steve Towns, Williams County sheriff, and two sheriff deputies at the home of Tiffany Fivecoate in Stryker on Sunday, March 3.

WCSD deputies received information saying Ball was at the Fivecoat home, at 103 King St. When deputies went to the door and asked for Ball at about 11 am that day, Fivecoat said he wasn’t there.

Deputies then staked out the house and called Towns, who prepared a search warrant and found a judge to sign it.

About 2 1/2 hours later, Towns walked up to the door with the search warrant in hand.

Towns said at the time, once Ball knew (Towns) and deputies were coming in the house “one way or another,” he came outside as they were walking to the door.

Ball and Fivecoat were placed under arrest, Ball on pending charges and Fivecoat for obstructing justice. Both were taken to the Corrections Center of Northwest Ohio.

Fivecoat was released the following day.

In Fulton County, Ball was indicted on a charge of theft from an elderly person or disabled adult, theft, and forgery on Sept. 24, 2012.

He was indicted again on Feb. 11, 2013, on a charge of unauthorized use of a motor vehicle.

Court records indicate he pled guilty to one count of theft and the unauthorized use charge.

He was sentenced on Wednesday, June 5, to three years of community control.

Ball was ordered to pay the cost of prosecution and attorney fees and have no contact with the victim.

He was ordered to stay out of bars and/or taverns, not to possess or consume alcohol, abide by an 11 pm to 6 am curfew, seek and maintain employment, and complete the SEARCH program in Bowling Green.

Failure to comply could result in a 22-month prison sentence.

Ball was sentenced Monday, June 10, in Williams County Common Pleas Court on a total of four counts each of receiving stolen property and forgery.

He entered guilty pleas to all charges on May 1.

If he violates rules of his community control, he could be sent to prison for up to 11 months per count.

He was ordered to pay $1,823.49 in restitution, the cost of prosecution, plus court-appointed attorney fees.

As of Thursday, June 13, Ball was still being held at CCNO, where he has been since his March 3 arrest.

In addition to the obstructing justice charge, Fivecoate, who now has a Pioneer address, was indicted on a charge of aggravated possession of drugs by a Williams County grand jury on April 16.

A motion seeking drug intervention in lieu of criminal conviction was filed on her behalf on May 21.

The motion is pending.