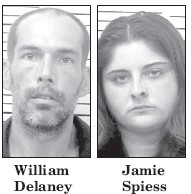 William Delaney, 39, rural Delta, who was found to have been in possession of bronze grave markers stolen from Wauseon cemeteries, has been sentenced.

He was sentenced to two years of community control and 61 days in the Corrections Center of Northwest Ohio with credit for 61 days already served, after pleading guilty to a charge of receiving stolen property.

The bronze markers are designed to hold a small American flag. They adorn the graves of those who served in U.S. Armed Forces during wartime.

About 100 of the markers were stolen from Wauseon Union Cemetery prior to Thursday, Aug. 2.

Another 16 were taken from the Zion United Methodist Church cemetery, located on Co. Rd. 11 between Co. Rds. D and E.

Value of the stolen markers was placed at around $2,500.

A spokesman from the Fulton County Sheriff Department said workers at a scrap metal yard reported receiving suspicious-looking metal. Upon investigation, it was discovered the metal was the grave markers, cut into small pieces.

The charge against Delaney states he had the grave markers in his possession from Aug. 1 to 5.

Warrants for the arrest of Delaney, and Jamie Spiess, 25, rural Wauseon, also charged with receiving stolen property in connection with the case, were issued Friday, Aug. 10.

Delaney and Spiess were booked into CCNO, Thursday, Aug. 16.

They were indicted by a Fulton County Grand Jury, Monday, Aug. 20.

Delaney was also ordered to pay the cost of his prosecution, attorney fees, and make $2,576.35 in restitution to the Fulton County Veteran Services Office.

He was also ordered to have no contact with Spiess, Jeremy Heising, or their families, complete treatment at Fresh Start, not to possess or consume alcohol, and stay out of bars and-or taverns, including the American Legion.

He was ordered to seek and maintain employment, and abide by an 11 pm to 6 am curfew.

Failure to comply could result in an 11-month prison sentence.

The receiving stolen property charge against Spiess is still pending.

She was released on her own recognizance on Sept. 4, but on Nov. 2, the Fulton County prosecutor office filed a motion to revoke her OR bond.

She was arrested and returned to CCNO on Nov. 5, where she is being held without bond.