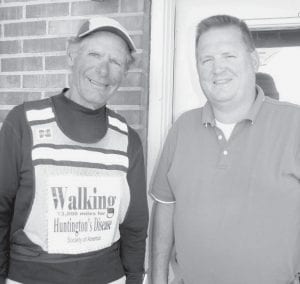 Kenny Cowell, Archbold, thought he could help a man in trouble Thursday night, July 31, but instead, discovered Don Stevenson, an ultra walker.

Stevenson, of Auburn, Wash., has walked more than 33,000 miles raising money and awareness for Alzheimer’s Disease, the American Cancer Society, and the American Lung Association.

He also completed a “blind walk” of 106 miles across the Cascade mountain range for the Maria Federici Trust Fund. That involved walking the distance blindfolded.

Federici, a Washington State resident, lost her eyesight after a piece of furniture flew off a trailer, pierced the windshield of her vehicle, and struck her in the face, leaving her blind.

He finished 10,000 miles for Huntington’s Disease awareness on April 22. Four days later, he set out to walk from the Seattle Space Needle to New York City Empire State Building, an additional 3,000 miles.

Two years ago, he walked to all 88 Ohio counties for the American Cancer Society, and received a letter from George W. Bush, U.S. president, commending him.

Cowell said he spotted Stevenson in the Burlington-Elmira area along US20A Thursday afternoon; after learning that Stevenson didn’t need assistance, he invited him to dine with him at a customer appreciation dinner hosted by Jodi Herman, a local insurance agent.

Stevenson said he walks about 30 miles a day, “more than a marathon.”

He gets about 500 to 600 miles from a pair of shoes, which are provided by the manufacturer. His wife, Loretta, follows in a vehicle.

They spend evenings in motels, often provided free of charge by the owners.

After finishing his dinner, the lean Stevenson joked, “I can’t seem to gain weight.”

Huntington’s Disease is an inherited neurological disorder that impairs a person’s ability to control muscles. They have difficulty walking, have uncontrollable movements, and the disease impacts their mental abilities.

The offspring of a parent who has the disease has a 50% chance of developing it.

Stevenson said a friend, Jack Meteyer, lost his mother, a sister, and two brothers to Huntington’s, which inspired him to make his latest walk.

Stevenson said in all the miles he’s covered, “I’ve not met a bad person.

“America is not the six o’clock news. There are good people,” he said.

“Money is getting tighter, prices are going up, but people are still willing to give,” he said.- David Pugh