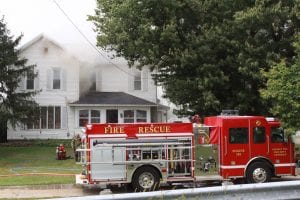 Archbold Fire Department crews were assisted by fire fighters from four other departments in battling a blaze in this home on Co. Rd. 26-2 Tuesday, Aug. 27.-photo by Mary Huber

Jerry Zimmerman, rural Archbold, was in critical condition on Wednesday at the St. Vincent Mercy Medical Center after he was burned in an early Tuesday afternoon, Aug. 27 house fire.

Brodbeck said he was the first to arrive at the fire scene, and found Zimmerman standing in the front yard, suffering from burns. ALS-1, the Archbold-based paramedic unit, arrived soon thereafter, and began treating Zimmerman.

Paramedics determined Zimmerman need to be taken to a burn center, so a helicopter ambulance was called to the scene. A Fulton County sheriff deputy assisted in landing the aircraft. Zimmerman was put aboard the craft and flown to St. Vs.

Brodbeck said when he arrived, the fire was in the kitchen of the older two-story, wood-frame home owned by Ron Dean, 8518 Co. Rd. 26-2. The first AFD fire engine to arrive, Engine 102, parked in the home’s driveway. Firefighters pulled off attack lines and went into the kitchen. Brodbeck said they quickly extinguished the flames they could see.

However, the fire spread between the interior and exterior walls and worked its way to the second floor and attic. Walls had to be ripped out to find and extinguish the fire, a process known as “overhaul.”

Brodbeck said the visible fire was out in about 20 minutes; the rest of the time was spent tearing out walls and tracking the remaining fire down.

Archbold Engine 104 arrived on the scene and parked in the roadway. AFD Tanker 106 was next. Its crew set up a portable tank, and 104 began pumping water from the tank back to 102.

Because of the heat and hard work, crews were cycled out of the home and sent to a rehabilitation area, where they could rest, get something to drink, and have their conditions checked by the paramedics of ALS-1.

Crews were on scene about three hours.

Brodbeck said he has not determined an exact cause of the fire, but has narrowed it down to the kitchen, particularly on or around the stove.