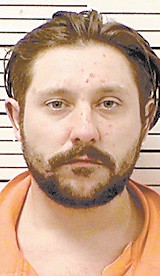 Kevin R. Brown, 27, has been arrested and charged with bomb making in connection with a search warrant served at a Fayette home, Wednesday, Nov. 22.

Officers were looking for drugs or drug-related items, but instead came across a “homemade explosive device.”

The Toledo Police Bomb Squad was called to the home. They arrived, made the bomb safe, and placed it into evidence.

K. Brown was booked into the Corrections Center of Northwest Ohio Friday, Dec. 1.

Jerry Brown, an officer with the MAN Unit, said he was not familiar with the circumstances of K. Brown’s arrest.

K. Brown had an initial appearance in Western District Court via video from CCNO, Monday, Dec. 4. Bond was set at $100,000.

Posting 10% of the bond is not allowed.

As of yesterday morning, Tuesday, K. Brown was still in custody at CCNO.

The charge against K. Brown is a felony-level crime. The case will be heard in Fulton County Common Pleas Court.

J. Brown said he could not discuss details of the case, because the investigation is ongoing.