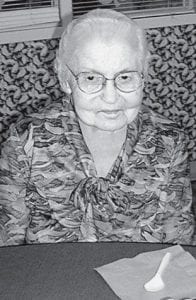 Born on March 27, 1908, Mable Stuckey recently celebrated her 100th birthday at Fairlawn Haven, Archbold. In the 1990s she moved to the Fairlawn complex.

Born near Pettisville, she married Lloyd Gisel in 1931. Their family included three daughters, Lois Leidig, Ruth Nafziger and Lavonne Bixler. After her husband died in 1935 Mable raised their daughters.

She is a member of West Clinton Mennonite Church. At 98 she gave up her Fairlawn apartment, and moved to a West Haven apartment.