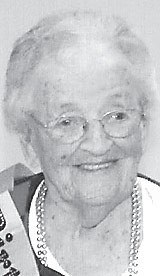 Mabel was born Nov. 15, 1915, in Williams County, Ohio, the daughter of the late Adam and Minnie (Siegel) Coulon.

She was a 1933 graduate of West Unity High School.

Mabel was a devoted wife and mother, who assisted her husband in operating the family farm.

She also ran “Mabel’s Market” near Harrison Lake, which featured her baked goods.

She was a member of the West Franklin Church of Christ.

Mabel was known to be a “people person” and a hard worker. She was known for her fruit pies. She also enjoyed gardening.

Those planning an expression of sympathy are asked to consider memorial contributions be made to Community Health Professionals Inpatient Hospice, 6825 State Route 66 North, Defiance, Ohio 43512.