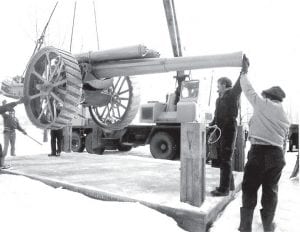 The World War I cannon is put in place at the memorial site in Ruihley Park. It was replaced with a Civil War cannon.

(Editor’s Note: The following article is reprinted from the July 27, 1966, edition of the Archbold Buckeye.)

Three brothers, Peter, Eli, and Sylvanus Lugbill had much to do with the growth and development of Archbold.

In 1919 they were stock buyers, and the firm became Archbold Livestock Co.

In 1929, and in 1934 they started a livestock auction. First sale was held the first Monday in June. In August 1936 they held their first Thursday sale.

About 1961 they acquired a similar auction at Columbus Grove, operating it on Fridays.

The business grew, they expanded the buildings, added more employees, and the New York Central built a spur to their facility in 1946. In 1937 they started a meat packing plant that was sold to Eckert in 1957.

The auction barn was purchased by Michigan Livestock Exchange in 1989.

The company closed the operation in 2001, and the auction barn was torn down soon after that.

The former Dinner Bell packing plant, which was located behind the barn, still stands, and has been through a number of uses.

Today, a strip mall, featuring three restaurants, a drug store, and other businesses stands where the barn once stood.