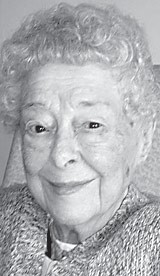 Luella “Lu” May (Yedica) Alexander, 93, of Napoleon, passed away peacefully surrounded by her family on Wednesday, March16,2016, at the Orchards of Northcrest, Napoleon.

Lu and Roger owned and operated Alexander Floor Covering in Napoleon from 1957 to 1972, closing the business to become associates for Crahan’s Floor Covering.

In August 1973, Lu was the first to teach interior design at Four County Vocational School at the request of the school superintendent. She retired in 1991.

She was a member of Emanuel Lutheran Church of Napoleon, Henry County Retired Teachers, and Ohio STRS.

She was a past member of Napoleon Soroptomist Club, Business and Professional Women, Henry County Hospital Auxiliary and a former Cub Scout leader and Girl Scout co-leader.

Rodenberger Funeral Home, Napoleon, was entrusted with the arrangements.

Online condolences may be made at www.rodenbergerfuneralhome.com.