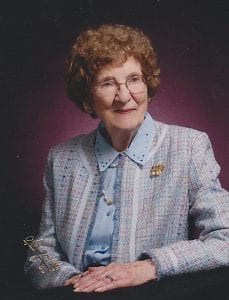 Lucille N. Liechty, Wauseon, passed away peacefully on Thursday, June 13, 2013, in the home of her daughter and son-in-law, Marilyn and Don Harris, in Burke, Va., where she resided since September 2003.

Born Sept. 25, 1910, near Stryker, to Oliver and Cora Young, she came to Wauseon in 1939 after marrying Chris W. Liechty, owner and operator of Sunny Crest Farms integrated poultry operation.

Stryker High School graduate and valedictorian, Lucille then received her B.S. in education from Bowling Green in 1931. There, she was active in the Seven Sisters Sorority (now Alpha Phi), Book & Motor Honorary Society, Y.W.C.A., as well as being a yearbook editor and  1931 May Queen.

She taught English, French and drama in Attica, Bryan and Stryker high schools.

She was parent co-chair for Wauseon High School’s first all-night prom and party. As WHS Band Mothers president, she helped pioneer two other successful “firsts”: a WHS band fund-raising concert by the U.S. Navy Band in Wauseon, and a band boosters concession stand at the Fulton County Fair.

She was active in PTA, Tuesday Club; was registrar for the local D.A.R. chapter; and a member of the local AAUW, Fulton County Historical Society, and National Retired Teachers Association.

She loved being a Fulton County Health Center volunteer until age 92.

As a charter member of the Evangelical Mennonite Church (now Crossroads), she established the Cradle Roll ministry and was active in many of the church’s earliest traditions, particularly seasonal church decorating.

She often made altar flower arrangements from her gardens.

In her 90s, she loved assisting with child care during a weekly program for young mothers there.

With husband, Chris, she led classes of school children on tours of their hatchery operation.

She appeared on Toledo’s local TV broadcast of Romper Room with a special presentation on the hatching process.

Both avid gardener and excellent cook, she often took flowers, garden produce or homemade specialties to others.

At age 90, a Toledo Blade article revealed her lifelong interest in writing, reporting her second-place award in Sauder Village’s poetry writing competition with her poem, “Treasures,” about her own valued treasures: family and nature’s simple beauties.

Once in Northern Virginia, just outside Washington, D.C., she enjoyed many new friends and activities, including in her daughter’s church, as well as in several seniors programs.

Her 100th birthday celebrations included parties, on-air greetings from the Today show’s Willard Scott;  special gifts and greetings from BGSU’s president and alumni staff, and an alumni magazine feature about her, since both BGSU and Lucille celebrated 100th birthdays in 2010.

Friends may call in the Chapel at Crossroads Evangelical Church in Wauseon on Friday, June 21, 2013, from 3 p.m. until 7 p.m.

A celebration of Lucille’s life will be held in the Chapel at Crossroads Evangelical Church at 10:30 a.m., Saturday, June 22, 2013, with Pastor Matthew Boyers officiating. Interment will follow in the Pettisville Cemetery.

Another service will be held at a later date in Burke United Methodist Church, Burke, Va.

Memorials may be made to Crossroads, Hands of Grace, the Fulton County Historical Society, Fulton County Health Center Auxiliary, or to a hospice of choice.

Edgar-Grisier Funeral Home in Wauseon has been entrusted with arrangements. Online condolences may be offered at www.GrisierFH.com.-Posted 6.15, 2 pm