Love Of Horses Keep Oyer, Felix In The Saddle

by Andrea Kelley
Special to the Buckeye 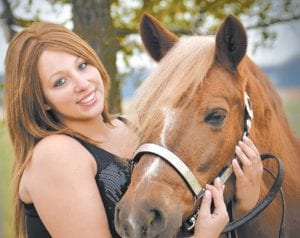 Mikaela Oyer, left, and Melissa Felix, right, have been involved in horse shows since they were young. Oyer was participating in shows before she could walk; Felix started competing in middle school. The two compete in shows almost every weekend.– courtesy photos

Who didn’t want a horse or pony when you were little?

Melissa Felix and Mikaela Oyer, two 19-year-olds from Archbold, turned that dream into a reality.

They spend much of their time working with and showing horses.

Felix, daughter of Deb, currently has two horses. She owns Peanut, a quarter horse/thoroughbred mix, and she leases Arnold, a pure quarter horse.

Oyer, daughter of Keith and Peggy, owns four quarter horses but doesn’t usually take all four to every show.

Felix started her showing career in middle school by taking horses for 4-H to the Henry County Fair.

She didn’t really enjoy it then, but, “you can’t go to the fair and not show your horse,” so she showed anyway.

It was stressful and timeconsuming, at first.

Now that she is more comfortable with the process and knows what she’s doing, she finds it relaxing and fun.

Oyer, whose family has been involved in showing horses, said she has been showing since before she could walk. 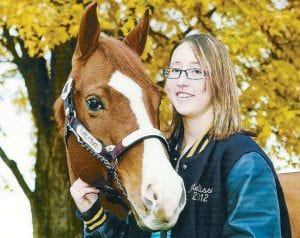 Her first shows were leadline shows.

A child as young as six months sits in the saddle and is judged with the horse, but a parent leads the horse around the ring.

When she was old enough, she began showing on her own.

Showing horses is a lot harder than it seems.

“There’s a lot going on behind the scenes. It takes a lot of time, money, and practice,” Oyer said.

She doesn’t mind, though. Her favorite part is bonding with the horse, and stepping out into the show ring as a team.

“No matter how a show goes, there is always something new to work on. There’s never a stopping point,” Oyer said.

They look online or ask around to find shows, or check in magazines for show bills.

A typical weekend show is an hour or two away, but some can be as far as four hours.

The horse crowd isn’t really big, and sometimes the girls see each other at the local shows.

There are many different genres of horse shows, including pleasure shows, speed, and jumping.

In the morning are the halter and showmanship classes. The rider walks beside the horse and takes them in a pattern– a specific path around the ring– in order to show off the horse.

The showmanship class focuses on the communication and bond between horse and rider.

In the afternoon, the Western and English classes take place.

First, the rider, wearing appropriate clothing, puts an English-style saddle and bridle on the horse, then does a walk-trot-canter sequence around the ring.

Then they turn and do the same sequence in the other direction.

This section focuses on how well the horse moves and transitions from one gait to the next.

For the Western class, the rider wears a different outfit, and puts on a western-style saddle and bridle. They do the same walk-trot-canter sequence as in the English class, but this time, they ride in the Western style.

The four classes are the same for the majority of horse shows.

Felix’s favorite is the showmanship class, because she enjoys walking the pattern and, “both horses are good at it.”

She knows she can do a good job, and it is an opportunity to show the horse off to the judge.

People often think horse shows are expensive, but for local shows, the entry fee is usually about $5 per class.

In a typical pleasure show with the four classes, entry fees are $20.

Though keeping a horse is expensive, the actual showing is not.

All About The Bling

One thing often associated with horse shows is “bling”– saddles and bridles covered in brilliant silver, girls wearing outfits with lots of pizzazz, glitz, and glimmer.

It’s all about the silver, whether it’s on the saddle, lining the bridle, or on the rider.

Oyer embraces this tradition. She enjoys the western classes the most because “it’s more fun to ride, and the outfits are very detailed.”

Oyer admitted the decorative outfits could be very hot and heavy, especially in the summer.

She usually wears a nice collared shirt, chaps, and a hat. The horse wears a normal saddle, or one with just a bit of silver, and a black saddle pad.

Felix will go a bit blingier for the larger shows, where the other girls are wearing a lot of decoration as well.

In the long run, Felix says, it doesn’t matter what you wear.

The only thing that matters is what you do in the show pen, and how well you ride.

Because of this, she prefers to dress simply.

“You want the horse to be noticed, too, not just you. “