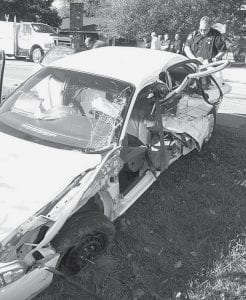 Aaron Gladieux, Fulton Co. Sheriff Dept. deputy, prepares his report on a Monday, Oct. 22 auto mishap. Mary Grime, 78, rural Archbold, was treated and released at the Fulton Co. Health Center after a trailer came loose from the vehicle towing it and struck the side of her car.- photo by David Pugh

Mary Grime, 78, rural Archbold, was treated and released at the Fulton County Health Center, after her car was struck by a trailer that came unhitched from a pickup.

The report states the singleaxle landscaping-style trailer became unhitched from the truck, went left of center, and struck Grime’s auto, which came to rest in the ditch on the east side of the highway.

Because the impact occurred east of the center of North Defiance Street, the crash technically occurred outside the Archbold village limits, putting it in the sheriff department’s jurisdiction.

Archbold Rescue responded to the scene, and transported Grime to FCHC.