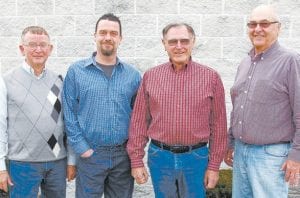 After 110-plus years of combined service on the Fulton County Fair Board, Carl Buehrer, Al Garrow, Richard Mull, and Curt Johnson, from left, retire from the board and look forward to attending the fair as civilians. All four men are confident in the future growth and continued success of the fair.– courtesy photo

During their collective 100-plus years of service on the 15-seat Fulton County Fair Board, the fair has been recognized as one of the best county fairs in Ohio and the tri-state region.

When the 2012 fair ended, Buehrer, Johnson, and Garrow decided to retire and not run for additional terms on the fair board.

They’ll attend this year’s fair as visitors for the first time in decades.

“I enjoyed it,” Mull said. “For the first time in 31 years, I actually got to see a concert and the tractor pulls.”

Mull, 75, Wauseon, who represented York Township, and Curt Johnson, 70, Fayette, the Chesterfield Township representative, joined the board in 1981.

Garrow, 51, Lyons, joined in 1999 after two years on the fair board auxiliary.

All three were involved in 4-H as children and took projects to the fair.

Buehrer has a different story. As a boy, his family couldn’t afford for him to participate in the fair.

In 1972, he agreed to serve out the term of the board member representing Pike Township.

The next year, when he was nominated for fair board president, he was upfront about his inexperience.

“I told them I didn’t know anything about a fair,” recalled Buehrer, now 75 and a Delta resident.

“However, I said I’d do it if everyone agreed to a few simple rules.

“Second, if you’re given an assignment, it’s yours and yours only. If someone has a problem with what you’re doing, they must discuss it with you, not other people.

“And finally, if you’re elected to the fair board, your spouse and family will be working at the fair, too.

“They must have agreed, because I was elected president. And those simple rules helped the board to come together.”

Once it came together, there was no stopping it.

In the four decades since Buehrer was first elected board president, fair attendance has increased from 100,000 to a record 282,417 in 2010.

The fairgrounds have grown from 48 to nearly 200 acres, with 15 new buildings, five new restrooms, and space for 600 campers.

Two miles of road have been added, as well as 80 acres of parking– a necessity when over 70,000 people visit the fair on a single day.

The board spent $2 million in electrical system updates over the past three decades, along with major water and sewer improvements.

“We’ve invested in so many things on the fairgrounds,” said Mull, who was responsible for the midway for many years.

“I always said I had the best job on the board. I sent out contracts to vendors, collected payments, and accounted for all the funds. I worked with the vendors, and got to know them. Some of them have been coming since I was first on the board.”

Garrow, who ran the junior fair for many years, measures fair growth another way.

“Seeing the junior fair kids come in with projects their first year, shy and not talking, to seeing them raise their hand, talking, opening up their lives to other kids: that’s my favorite thing about being on the board,” he said.

As fair board members, Buehrer, Johnson, Mull, and Garrow– as well as many of their spouses and children– volunteered upwards of seven full weeks per year.

They showed up at weekly work nights from May through August, put in 18 hours per day during fair week, and nearly as many the week before and after.

In spite of their hard work, they refuse to take credit for the fair’s remarkable success.

“We never forgot that the fair was successful because of the community,” Buehrer said. “We always did our best to listen to the community and give them what they wanted at a price a family could afford.”

Although they attribute the length of their board service to much the same reasons– “It gets in your blood,” “It was like family,” “I enjoyed it,” “It was like a hobby,”– the factors that led them to retire were quite different.

Mull had heart surgery and thought it might be time for new people and ideas on the board. Garrow is battling lymphoma.

Buehrer believed that, after 40 years, his family deserved more of his time.

Johnson was nudged to thoughts of retirement during the 2012 fair when he saw a small child in the dairy barn and realized that his great-grandfather was showing cattle when Johnson first joined the board.

All four men are optimistic about the future of the fair.

“We all knew that it wasn’t ‘our fair’ more than anyone else’s,” said Johnson, a sentiment echoed by the others.

“It was just our turn to keep it going. Now it’s theirs. If they work as a team and respect one another, they’ll do fine.”