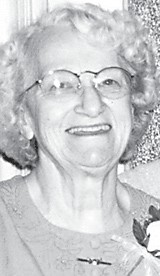 She grew up there and graduated from Bellevue High School in 1951.

Lois furthered her education to become a Licensed Practical Nurse and was working at University Hospital in Cleveland when she met Ervin Isaac Miller.

After moving to Archbold, Lois worked at Napoleon Hospital and then was on staff as an L.P.N. when Fairlawn Haven opened its doors.

She then became a fulltime homemaker, raising their three children, as Ervin was in trucking and was often away from home.

After the children were grown and gone, Lois worked at Kleck’s Bakery until they discontinued production, at which point she retired.

Following some time of several major surgeries and a broken hip, she received care at Fairlawn for rehab and in the fall of 2012 she became a resident at Fairlawn.

Lois loved to knit and sew and also made many items from plastic mesh, many of her own design. She enjoyed singing in a mixed choir in Cleveland, a mixed quartet in Archbold, and the choir at Fairlawn.

She loved deeply and had lifelong friends. She loved Jesus with all her heart and strove to live out what she studied in her Bible.

Lois was a longtime member of Central Mennonite Church with her husband. Ervin and Lois, along with their Sunday School Class, were very involved in the forming of The Loft, a place for teens to spend weekend evenings.

Lois Jeanne Miller is preceded in death by her parents; her husband; her brother and sister-in-law, Norris and Trudy Bernard; and granddaughter, Susan Marie Miller.

In lieu of flowers, memorials may be given to Gideons International, providing Bibles around the world.

The family thanks you for your love and prayers. Short Funeral Home in Archbold was entrusted with the arrangements. www.ShortFuneralHome.com.