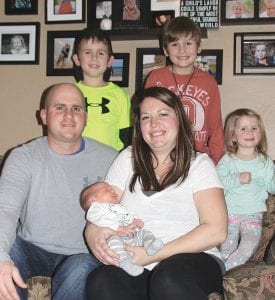 Lofton Jay Beck, the Archbold Buckeye First Baby of 2018, is the son of Jeremy & Meagan Beck, rural Archbold. Lofton was born on Jan. 2, 2018, at Fulton County Health Center, Wauseon. His siblings include, back row from left, Brody, 8; Jace, 10; and Devin, 2.– photo by David Pugh

The world did not have to wait long for the Archbold Buckeye First Baby of 2018.

Meagan didn’t have a baby; she gave birth to a linebacker.

“Tell me about it,” she said, with that special inflection that conveys far more than mere words.

Meagan said on New Year’s Day, she and Jeremy went out for Mexican food, then went to a large discount store “to walk around to try and get things going.

“But then at midnight, we went to the hospital.”

After 13 hours of labor, Lofton was born, with a complete set of fingers, toes, and all the other parts.

She was in labor for 13 hours?

“Yeah, tell me about it,” she said, adding, “It was long enough. Takes a while when you have a linebacker.”

“A lot of pacing back and forth,” Jeremy said. “It was a long pregnancy.”

“It was a long pregnancy,” Meagan said.

Was Lofton a late arrival?

“He was pretty much right on time. It just felt like it was never going to end, especially with all the Christmases and all the holidays. I was so big,” Meagan said.

Welcoming the newest Beck into the family are two brothers, Jace, 10, and Brody, 8, plus sister Devin, 2.

The boys were aware there was a new baby coming, but when it was time for Lofton to make his entry into the world, they went to Uncle Eric and Aunt Michelle (Beck)’s.

“Did you know why you were at Uncle Eric’s?” Jeremy asked his sons.

“They were just there for a sleepover, having a party,” Meagan said.

The siblings got the word the next afternoon.

It was quite a surprise, because the Becks didn’t know whether they would be welcoming a boy or a girl.

“It was a surprise,” Meagan said.

“Meagan thought it was going to be a girl,” Jeremy said.

“I thought it was going to be a girl,” Brody said.

“I was sick, just like I was with Devin, so I thought it was going to be another girl, but we were pleasantly surprised by a big boy,” Meagan said.

“It was a nice surprise.”

Lofton was born with just a little dark brown hair, and dark eyes.

He is the 100th member of the family started by Evelyn and the late Vernon Nafziger.

Lofton was able to visit his great-grandmother Evelyn at Fairlawn Care Center on Tuesday, Jan. 9.

“Grandma was very excited,” Meagan said. “She didn’t know about his name, but she liked his middle name because he’s named after grandpa.

It was just the third year for the First Baby promotion in the Buckeye.

Meagan said while she was pregnant with Lofton, she wanted candy in general, but specifically, Swedish Fish, fish-shaped gummy candies with different flavors.

“A lot of late-night runs,” Jeremy said. “You get them at the convenience store. They’re not very good.”

At that point, one of the boys asked, “Mom, why are you always eating salads lately?”

Lofton has not yet managed sleeping through the night.

One of the boys pipes up, “I never hear it.”

“Tonight, you guys can take the night shift,” Jeremy said.

Devin is sharing a room with the baby right now.

Even so, Meagan said Lofton has been a good baby.

“He isn’t phased too much by noise,” Jeremy said.

Meagan said Lofton’s first name was suggested by a friend.

“I really liked it and I thought Jeremy would like it because he’s a huge Cleveland Indians fan,” she said.

“I didn’t tell her everybody is just going to call him Kenny. Everyone likes that too,” he said.

Meagan said Devin wishes Lofton could play with her.

But right now, Lofton’s world is comprised of eating and sleeping.

Lofton’s other grandparents are Doug and Norma Kauffman and Mark and Janelle Beck, all of Archbold.

Great-grandparents are Glenn and Mabel Ann Kauffman, Wauseon; Lois Rufenacht and Arva Beck, both of Archbold.

As the Archbold Buckeye First Baby of 2018, Lofton receives several gifts, including:

•And a year’s subscription to the Archbold Buckeye.­*