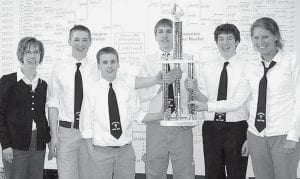 A total of 79 Bible Quiz teams, some from as far away as Pennsylvania and Virginia, poured into Archbold High School, Saturday morning, March 28, for the Northwest Ohio Bible Quizzing Invitational.

After 263 matches, it came down to two local teams, Lockport 1 and Sand Ridge, facing off in the Sunday morning championship match.

Lockport won the final to claim the 2009 championship.

It was the first time since 1969, when two Central Mennonite Church teams played each other, that two local teams made it to the finals.

Teams spent months of studying The Book of Genesis for the event.

Visiting registrants stayed in local homes, with many hosts taking in a team. A couple of gracious hosts welcomed over 30 guests. Hosts provided a place to sleep, breakfast, and transportation to the high school.

Quizzing started in 14 rooms at AHS on Saturday at 9 am and continued until the 7:30 pm match in the auditorium.

In a first-round match that determined where a team entered the tournament, eight local teams won against teams from Pennsylvania. These teams were Tedrow, Lockport 2, North Clinton 2, Central, Sonrise-Central, Sand Ridge, West Clinton 1, and West Clinton 2.

North Clinton 1 and St John’s also won matches in later rounds. Sonrise-Central, a team made up of quizzers from both Sonrise Community and Central Mennonite, advanced to the fourth round of the winners bracket and finished in 17th place. West Clinton 1 and Central 1 both finished 25th.

Just before supper, Lockport 1 faced Sand Ridge in the winners bracket. With Lockport down 25 points and one question to go, Wesley Short buzzed in on the question, “What is crouching at Cain’s door?”

With the answer “sin,” Short quizzed out and scored the team bonus, adding 35 points to the score and winning the match 90-80.

Sand Ridge fought its way back through the losers bracket with wins over Pennsylvania teams Slate Hill 1 and Petra 3 on Saturday night and Elizabethtown in the first match Sunday morning.

That put Sand Ridge into the championship match with Lockport.

Lockport took an early lead with Seth Nofziger’s quiz-out on question 4, but Sand Ridge came back with quiz-outs from Whitney and Collin Stamm to take the first match 100-60.

Another win was necessary to decide the double-elimination tournament. Lockport held on in a close match to win 65-50 and claim the tournament title.

Before teams left for home, it was announced that next year’s tournament is in Wayne County, with quizzing over the books of I and II Corinthians.